Wells family wraps Omaha trip up in maroon and white 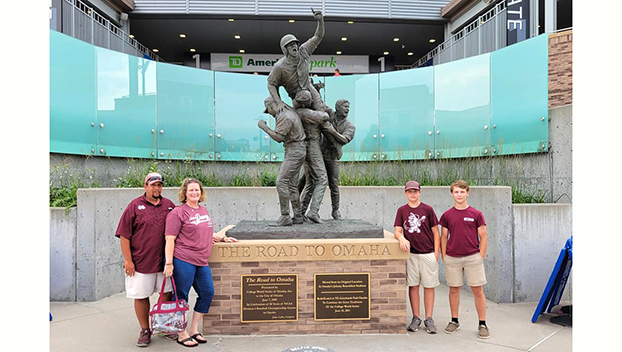 Natchez resident Patrick Wells said he and his family listened to Mississippi State win a national championship over the radio. Patrick, his wife Laurie, and their sons Mason and Cooper started “hooting, and hollering,” in their car when the final out was made.

They traveled to Omaha for the first two games of the finals, but Patrick had to return home to coach an All-Star team in the Vidalia Little League. His family traveled 14 hours Wednesday.

“We stopped and pulled over to watch it on our phones,” Patrick said.

While Patrick has waited for a championship since he became a state fan in high school 24 years ago, his wife has waited 43 years to see the Bulldogs take a title.

COVID canceled the season last year, and it might have been a fourth straight CWS appearance, he said. His belief of MSU winning the game sank in around the fourth inning.

Omaha was packed with Mississippi State fans. He estimated there were about 1,500 Vanderbilt fans in the 24,122 fans at game two of the series final. The amount of MSU fans created an electric atmosphere, he said.

“It was like being at a bigger Dudy Noble,” Wells said. “It was awesome. Walking around the stadium, you did not really see Vanderbilt people.”

His morning coffee tasted better this morning, he said.