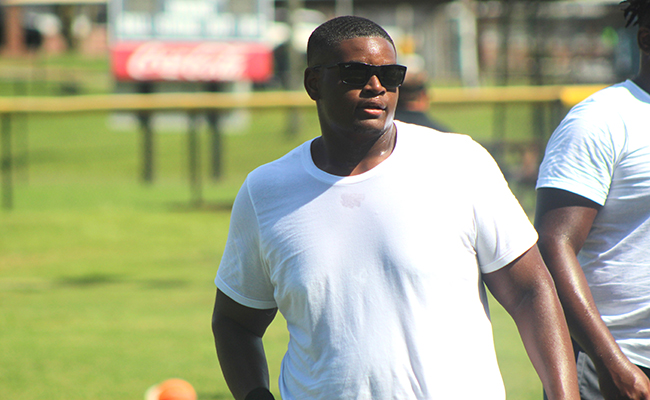 Michael Anderson is our best of preps winner this week. Anderson is an offensive linemen for Adams County Christian School. He transfered from Trinity Christian, a private school in Texas, to play football his senior year closer to home. (Hunter Cloud | The Natchez Democrat)

ACCS offensive lineman Michael Anderson wore a pair of shades as he ran through a box drill at practice Wednesday. The senior is excited for this season because he has returned home.

Originally from Jefferson County, Anderson was recruited by Deion Sanders to play at Trinity Christian, a private school in Cedar Hill, Texas. He said he missed his family and decided to come home for his senior year.

“In Texas, I was up there by myself. I did not have anybody to lean on,” Anderson said. “Now I get to spend my senior year down here. Just be with a new family at AC. It is a new experience.”

Sweat dripped off of his chin and soaked his shirt as he took a breath from the 91-degree weather. As the sun bakes the Rebel football team, Anderson said the summer heat gets them ready for football season.

Summer practices are an opportunity for linemen to work on their footwork and hands before putting on football pads this fall. Strength is another trait forged in the summertime, he said.

“It’s just getting me ready for a good season,” Anderson said. “We are trying to win state. We are trying to go all the way this year. I just transferred here from Trinity, so I bring a lot of leadership skills and experience with me. We are just trying to get better.”

“It is a lot to get adjusted to,” Anderson said. “Overall, it has been a great experience. I think we are going to do some great things this season. Helping younger players means a lot. They can come to me about anything, whether it is about football or not.”

The University of Arkansas at Monticello is the only scholarship offer Anderson has going into his senior year, he said. He has played football since he was seven years old. He said he does not have a dream college in particular.

“This senior year, I’m going to show who I am and why I came from where I came from because I’m hungry,” Anderson said. “What fuels me as a player is my family, and most of all, Christ. My parents not having to pay for my school, that would mean the most to me.”