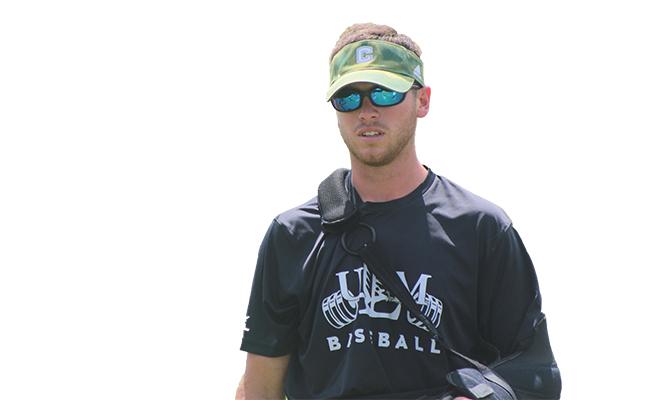 NATCHEZ — Andrew Beesley’s senior season was bitter sweet. He was able to play a full season after COVID cut the previous season short. A torn labrum and fractured vertebrae turned the season for the worst.

Pain from the injuries was substantial but he tried to play through it, he said. His torn labrum was the toughest to play with, he said.

Those injuries forced a retirement from playing baseball, but they will not keep Beesley from staying involved on the field. Wearing a University of Louisiana Monroe baseball shirt, a green cathedral visor and a cast on his injured arm, Beesley is starting the next chapter of his athletic career as a coach for Cathedral.

“I’m pretty excited to work alongside my dad,” Beesley said. “I’m just going to try and fill his shoes. I will be coaching both baseball and football. I will have four or five history classes I will be teaching.”

It was difficult at for Beesley to realize he was not ever going to play baseball again. His injuries did make it easier to hang up the cleats. Two weeks ago, he started his new position as a football and assistant coach with Cathedral.

“I had some other opportunities but I really wanted to come back to Cathedral and give back to a school that gave so much to me,” Beesley said. “I’m a competitive person. I couldn’t see myself getting away from the game right now. Being able to give back to the school that gave me so much, allowed me to play at division 1 and experience so much. I would love to pass that on to another kid down the line.”

In accepting the position, he carries on a family tradition of service to the Cathedral athletic program. Andrew’s grandfather Ken Beesley coached for 40 years at Cathedral. Its football field is named after him.

Green Wave baseball coach Craig Beesley is Andrew’s dad. He said they share a close bond. Father and son fish and hunt in the outdoors together when they get the free time, Andrew said. His memories with his dad on the ball fields go back to when he was a little kid, he said.

“Even my mom she is gung-ho on baseball. She knows everything about the game,” Beesley said. “Ever since I was little, my dad taught me the ways and I was right there with him in the dugout during practice or games when I was young. He taught me how to do things the right way. To work with him is a dream come true honestly.”

During the 2021 baseball season, Andrew was playing in a game against LSU. Craig had bought tickets to the game thinking he would be able to make it. Instead, Cathedral made the MAIS playoffs and had a playoff game with Hartfield Academy. He watched his son play on his phone as he raked the pitchers mound and infield. Andrew said it was the way it goes in sports.

“He has missed some games throughout my career but it was understandable,” Beesley said. “That’s his job, it comes first. I know he has tried to be at every game he can. You have to be grateful for that. He has made more games than people will ever make. I know he is always there and watching me. I have always been grateful for that.”