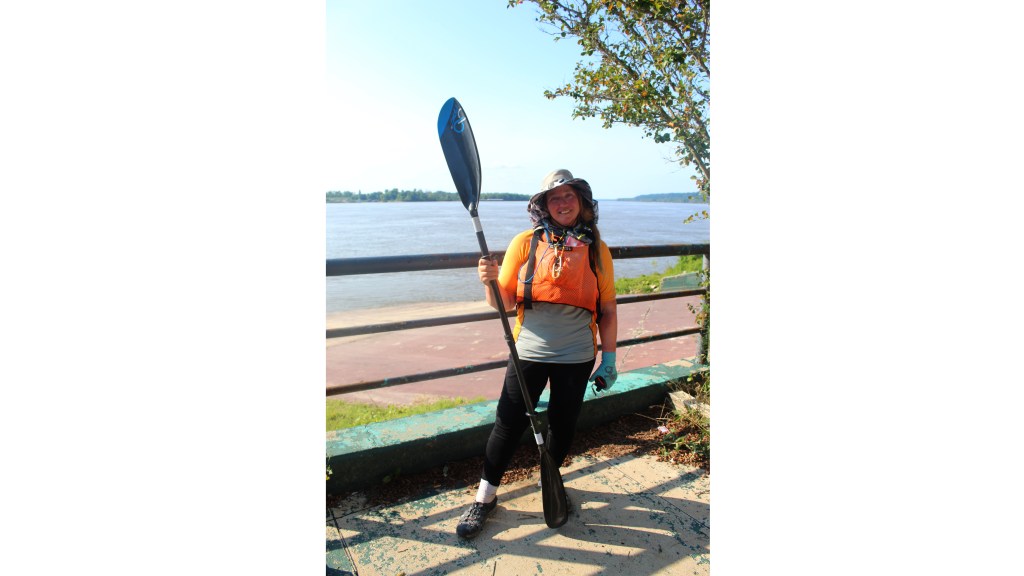 Traci Lynn Martin stands at the landing on the Mississippi River right before The Mississippi River Bridge in Natchez. She is attempting to kayak the river from source to sea and set a speed record for a female. She is on day 48 and has about 7 more days to go. (Hunter Cloud The Natchez Democrat)

Traci Lynn Martin stood at the boat ramp of Under-the-Hill in Natchez with her kayak after spending seven hours on the Mississippi River Saturday. May 17 was the day she left the headwaters at Lake Itasca in Minnesota, and Saturday was day 48 of her trip from source to sea.

Martin is a neonatal intensive care nurse in Kansas City and owns a house with her significant other Marv Kuziel in AuTrain, Michigan. Painted on her kayak are names of people she knows who suffer from chronic pain and rheumatoid arthritis.

Additionally, her name is painted on the kayak because she has rheumatoid arthritis. Instead of letting it keep her from doing what she loves, Martin set out to beat a Guinness world record of 61 days for the fastest solo female trip down the Mississippi River.

“I wanted to show people with chronic pain that you don’t have to give up on your life,” Martin said. “I struggle with pain from rheumatoid arthritis, so the message is just really important to me. I wanted to paddle something. I thought ‘if I have rheumatoid arthritis and I can paddle the Mississippi River from source to sea and set a speed record. Then when you struggle with chronic pain, you can still do the things that you love.’ My message to people is to never give up on their lives.”

An experienced kayaker, Martin has kayaked for 35 years. It is something she loves.

“I like being out on the water. It is my safe place,” Martin said.

There are 364 river miles left in her trip, and she does an average of 50 river miles a day. Roughly she has seven days left to go, she said.

In a section of the Mississippi north of St. Louis, Martin suffered a setback when an insect stung her face. The whole side of her face swelled up and her eye was swollen. Her hands swell because of her arthritis, but she hasn’t had any other setbacks.

Along the way, she has seen all sorts of wildlife such as deer, ducks, swans, porcupines, foxes and pelicans. Turtles are everywhere she said. Now she is down with the alligators, but they aren’t as dangerous as the natural forces of the river and commercial traffic.

“You have to deal with all of the whirlpools,” Martin said. “There was a place called Victoria’s Bend, and that was just absolutely crazy. There were three barges, and at Victoria’s Bend, only one barge can go in at a time because it is so narrow, and the whirlpools were just crazy. They were just everywhere. The river was bubbling and boiling. It is considered one of the most dangerous sections of the Mississippi River.”

Victoria’s Bend is in Bolivar County and is at river mile 596. Wing dikes are another obstacle she faces on the river. They can destroy her kayak or push her too far into the river.

Her Stellar Racer Surf Ski is a kayak built to handle big waves, she said. Onboard, she carries a spare paddle, a tent, food and three cell phones. An electronic tracker updates her position on the river and allows RaceOwl, a third-party agency, to record her journey for the Guinness World Record.

A Camelback backpack and Gatorade keep her hydrated on the river. She said she drinks close to three liters of water a day. When she gets really hot she will hold on to the side of her kayak and float in the water to cool off.

“I haven’t done that since I got into alligator country,” Martin said. “I wanted to do it today because I got really hot today. I decided not to because I didn’t want to take that chance.”

Compared to the Missouri River, which she considered paddling down, the Mississippi is a beautiful body of water, she said. Some of the sand islands in the river look like an island in the Caribbean Sea.

“Some of the pictures I have taken could be an island in the Caribbean, with sand and just the most amazing sky. I’m just really impressed with the beauty of it,” Martin said.”

Kuziel is her support driver. Each morning, they look at a chart of the river and plan for where she will land the kayak.

If she does not make it to her next destination, she will camp along the riverbank, she said. Four days ago, her friends Andrea and Dave came from Michigan to help out Kuziel support on the trip for Martin. Kuziel has been crucial to her journey, she said.

“I couldn’t have done this without him,” Martin said. “I’m looking forward to hitting mile marker 0 and finishing. I’m ready to go home. I’m tired.”