Twins play side by side on Rebel’s O-Line 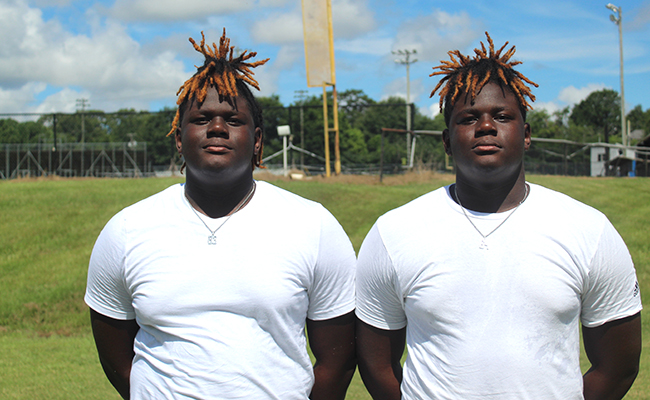 Left, Kamron Barnes and his twin brother Kyron Barnes take a break from summer football workouts at Adams County Christian School Wednesday afternoon. They play on the offensive line at ACCS and are natives of Fayette. (Hunter Cloud The Natchez Democrat)

NATCHEZ — Offensive linemen Kamron and Kyron Barnes share a lot in common. They have the same cleats, shorts, shirts, matching chain necklaces and the same hairstyle. These twins are from Jefferson County and play for Adams County Christian School.

The twins currently reside in Fayette and make a 30-minute drive to ACCS for school and football practice. Kyron said the commute could be shorter. Kamron said he does not like to drive, so Kyron gets behind the wheel.

Aux cord privileges are shared between the two brothers. Artists like M’M Boy and Moneybagg Yo are on the playlist they share. Kamron said they think on the same wavelength, so he is usually quiet in interviews.

“I stay quiet a lot because he is going to say the same thing I would,” Kamron said.

Kamron plays left guard, and Kyron plays left tackle. Tackle and guard are connected on the line. When Kyron and Kamron line up on the line of scrimmage this fall, their cleats will almost be touching as they get set.

Somehow, the brothers can communicate without any verbal words spoken. Kyron said thinking on the same wavelength helps them on the football field as they block opposing defensive linemen.

“I like playing alongside my brother because a lot of the time, we don’t even have to communicate,” Kyron said. “We already are around each other a whole lot. It helps a lot because we don’t have to say things to each other that would tell defensive lines what we are doing. I don’t have to tell him to pass block, or I need help. We just have to point it out.”

Football has been a shared sport between the two since they were five years old. Kamron said they have a verbal commitment to the University of Southern Mississippi to play football.

Southern Miss would allow the players to play together at the next level. In their 12 years of playing football together, the two have never played against each other. Playing on the same team together in college would continue that streak.

“It makes our journey longer if we could play together,” Kyron said. “When USM first talked to us, it wasn’t like normal recruitment. They talked to us like we were family. They treated us like we are family.”

USM treated the brothers like family, Kyron said. Family is the same word they used to describe the culture at Adams County Christian School. When they transferred from Jefferson County three years ago, ACCS welcomed them with open arms, Kamron said.

“ACCS is amazing. Even if you are a new student who transferred here,” Kamron said. “Not only are the coaches going to greet you. The students and the teachers are going to. You won’t be shy when you come here. They are going to break you out of your shy shell. When we first got here, we were shy for the first two months. They wouldn’t stop talking to us, so we broke out of our shell.”

Summer practices have prepared the Barnes twins for their senior season.  Improvements to speed, footwork and stamina will come in handy this fall. They will play on offense and defense for the Rebels, they said.

Just like on the offensive line, they will play together defensively. The Barnes twins’ favorite memory of playing together at ACCS was their magical state runner-up run last season.

“Last season, we weren’t ranked very high. We had a lot of doubt about if we were going to make it to State,” Kyron said. “Through the summer and through the season, we pushed hard to get as good as possible. We just love playing the game. Everyone at ACCS loves playing football.”