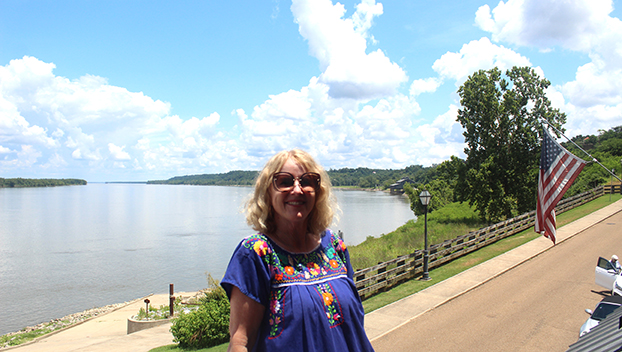 Marian Goodell, CEO of Burning Man, made a stop in Natchez on her eight week road trip from San Francisco throughout the US and back to San Francisco. She has worked with Burning Man for 25 years. (Hunter Cloud | The Natchez Democrat)

NATCHEZ — Burning Man CEO Marian Goodell has spent the past 25 years organizing the Burning Man concert in the Black Rock Desert in northwestern Nevada. She said the whole summer is spent getting ready for the event of artistic expression.

After COVID canceled Burning Man in 2020 and 2021, she decided to take a break from the concert and go on a road trip, which landed her in Natchez last week.

“I thought after 25 years maybe I deserve a road trip,” Goodell said. “I thought maybe I should go explore the 50 states that have burning people who come.”

Before she helped organize Burning Man, Goodell studied photography and had an interest in film. After her aunt passed away in March, she decided to set out on a road trip from San Francisco, California, on June 19.

She is going on this odyssey in a van equipped with a kitchen, bed and toilet. She carries a camera to shoot video with and is making stops along the way hoping to create and share stories.

“(My aunt) was in her 80’s and I never got a chance to interview her,” Goodell said. “It inspired me to go visit my family. Start catching their stories by provoking and asking questions. Not really interviewing them, but letting them talk.”

El Paso, Texas was the first stop on her journey. El Paso is the home of her uncle and where her Dad grew up, she said. Houston was next, where she visited her sister. St. Charles Avenue where her aunt lived was another checkpoint.

Driving up from New Orleans, Goodell is making her way to Washington D.C. before traveling to Michigan, Chicago and back to San Francisco.

She is in Mississippi to meet a man in Jackson who is in his 70’s and has attended Burning Man for the past 10 years, she said.

Two of Goodell’s friends told her to take a detour to Natchez, so she did.

“It was wide and green and it started raining. I started taking pictures as I was driving because I felt like I was coming to a really special place,“ Goodell said. “It wasn’t off of I-10. I had to really think about coming here. It was just very green with the rain. In California, we have a drought and Burning Man is held in the desert. The feeling was really lush. I felt like I was going on an adventure.”

Her Natchez adventure began with a trip down Cemetery Road.

Dusk had fallen on the city as the sun sank behind the Mississippi River Bridge.

Wednesday night, she had crab cakes, fries with Gouda cheese and a mint julep at Dunleith’s Castle. Thursday morning, Goodell visited with Regina Charboneau at the Little Easy while eating shrimp and grits croquet with a matcha latte for breakfast. Charboneau explained to her the city was in the middle of revitalization. She gave good insight to how the community is working together, Goodell said.

Driving down to Magnolia Grill, she stopped to get out of her vehicle and look out over the river. As she watched two tugboats push barges, she started filming. The barges intersected, one traveling up the river, the other traveling down.

America’s mighty Mississippi River is a connecting force for commerce, culture and people, Goodell said. Her mother is a native of New Orleans, and as Goodell watches the river flow beneath the bridge, she is reminded of Jackson Square in New Orleans, she said.

“I used to be really fascinated with the Mississippi River in New Orleans,” Goodell said. “I would go to Jackson Square and just sit. There was always someone who said ‘it’s time to go. We have to go.’ What I really loved was the movement of the barges and the boats. The sound of the boats going  ‘choom choom choom.’ (There is) beauty to me in watching the boats and hearing the sound.”

Growing up in the Midwest, Goodell said she still had a connection to the south through her mother. Cheesy grits were a breakfast staple, as was southern hospitality and sharing cocktails with guests.

On her cross-country journey, she is visiting a region of America she has not spent a lot of time in.