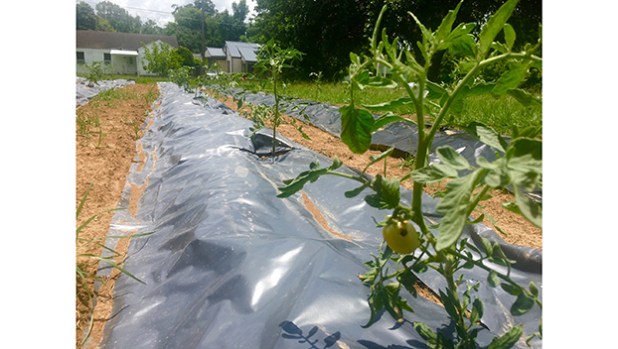 Prepared rows of tomatoes about to take off in the community garden. (Chloe Abernathy | The Natchez Democrat) 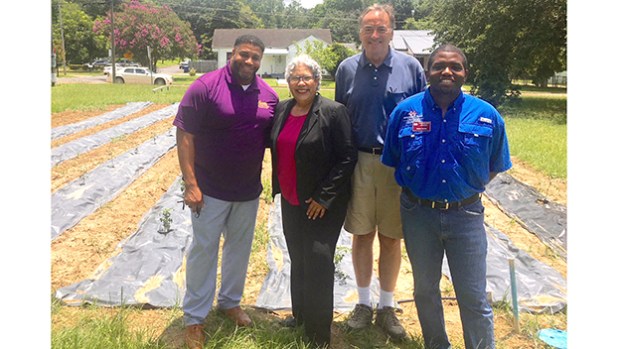 Alderwoman Valencia Hall said she has been working alongside Downtown Farmers Market Director Eddie Burkes, as well as members of the city planning department to plan and develop a quality garden for the Natchez area.

“It’s not only for the residents here and in this neighborhood,” Alderwoman Hall said, “but for the community at large. Especially those who cannot access healthy produce and who need it for health reasons.”

Farmers Market Director Eddie Burkes explained the goal of this garden is unlike most traditional community gardens. Instead of members of the community having free range to plant, the garden is a structured project from the city in order to give the community fresh, local produce.

“What we want to do as a group of volunteers is to implement these gardens and then harvest that product and also distribute it in the community it’s in as well as the community at large,” Burkes said. “We are looking to be able to provide some healthy produce to those who need the nourishment for dietary reasons or don’t have access to it.”

“We gave our expertise on what to plant,” Mississippi State Extension Agent Jason Jones said, “our expertise on providing resources or connections for getting grant money for supplies and things of that nature.”

Burkes worked to find a quality site with the aid of Alcorn State Extension Area Agricultural Educator King and Jones. Together, the group decided upon Osceola Neighborhood Park as the best location for the new garden due to its soil quality, water access and sunlight exposure.

Volunteers broke ground for the garden in late May. However, due to difficulties caused by rain, the crops were not planted until June. Since then, the seven-row garden has flourished.

The garden boasts 36 tomato plants, which are now starting to bear fruit.

King said this garden will not only be a great opportunity for community outreach, but also an oportunity to educate the community on gardening and healthy living.

“This is a small non-traditional garden,” King said, “but this is a good way to show people how to grow fresh vegetables.”

Hall said it is from the hard work of everyone involved that this project has been as successful as it has.

“It’s a community effort,” Hall said. “We are thanking everyone, the Mississippi State Extension, Mr. Burkes, Judge Ward, everyone who had a part in getting this going.”

With the new garden up and growing, it is in need of volunteers from the community to help continue the project.

Burkes said with this community garden there are plenty of volunteer opportunities. He is currently seeking volunteers for all seasons of growing, such as preparing the garden, planting, tilling, rowing, harvesting the crops and distribution.

Anyone who is interested in volunteering or donating to the project is encouraged to contact Farmers Market Director Eddie Burkes via email at eburkes@natchez.ms.us.