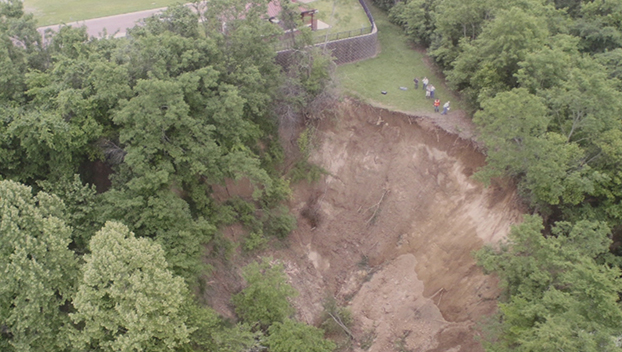 An aerial photograph taken by the U.S. Army Corps of Engineers in April shows the extent of erosion damage along the Natchez bluff.

Erosion at the Natchez National Cemetery has been deemed an emergency by federal authorities, meaning a contractor could be hired as early as next month to begin stabilizing the bluff, authorities said.

Because of the additional erosion this spring “We authorized emergency action,” said Jared Minor, senior project manager for the U.S. Army Corps of Engineers’ Vicksburg District. “Last week we ‘shrink-wrapped this whole region (near the new extension of the cemetery). On June 3, we had a pre-solicitation meeting with about five contractors. Four are really interested. We anticipate the bids coming about July 16. And we can turn them around (for review) the next week after that and award the project by the end of July.” Minor added, “Then we anticipate moving very quickly to get equipment on site.”

“We persevered, and we’re finally at a point where we can get authorization by the end of the week so a (contract) award can be made soon,” said Melissa S. Decker, senior advisor with the U.S. Department of Veterans Affairs. She said money has been appropriated for the project.

The multi-million-dollar project will secure the bluffs along the western edge of the cemetery’s new extension similar to the bluff stabilization methods used along the bluffs further south of the cemetery, officials said. The project should take about a year to complete once it is started, they said, adding that actual construction of the retaining system should start by the end of August.

Mayor Dan Gibson said at the meeting, “It’s been a terrible thing watching the bluff fall in.”

Emergency action was authorized “After the third erosion event … they have lost three to five feet of bluff in less than five weeks and two of these (weather) incidents were in three days. So, the speed at which the Corps of Engineers has worked has been very impressive,” Decker said. “We worked to drop everything for Natchez. The Army Corps … they are fantastic.”

Federal authorities began monitoring the bluffs in 2019 when a drone was deployed to survey the area, said Minor, who accompanied engineers in August 2020 to trek from the bottom of the bluff to the top to assess the erosion. He said the bluffs rise about 100 feet above the Mississippi River which is about a half-mile from the base. In all, about 10 feet of bluff territory has been lost to erosion, Minor said.

“This project is near and dear to my heart,” Minor said. “My grandfather, a Korean War veteran, passed away during Covid at the age of 91.”

Some changes will occur at the cemetery because of the project, said David Van Meter, assistant director. The committal shelter will be removed, and all burial ceremonies will be held at the original shelter in the older section of the cemetery, he said. Burials will still be done in the new section, he added. Also, the road into the new section will be closed while the bluff stabilization work is in progress. Individuals “will still be able to see (the graves of) their loved ones, but they need to park in the historical side.”

Van Meter said no graves were in jeopardy because of the erosion, and no burials were ceased. “We’re not gaining any additional burial spaces, but we’re not losing any, either,” he said.