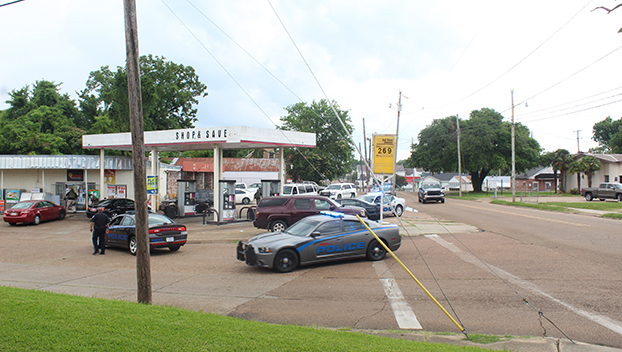 Law Enforcement with the Adams County Sheriff Office and the Natchez Police Department arrive on scene of the Shop N Save to perform a raid in June. (File photo | The Natchez Democrat)

NATCHEZ — After a raid and temporary closure of convenience store located at 1 Aldrich St. near Cathedral School in June, owners have since reopened the store and filed a lawsuit against the City of Natchez, Natchez Police Department and Adams County Sheriff’s Office, officials said Tuesday.

According to public records, a civil suit was filed June 28 in the U.S. District Court, Southern District of Mississippi western division by Abdulla Ahmed, Nasser Alhumasi and Kennedy Hussain of EZ Quick Stop LLC, who are represented by attorney Everett T. Sanders. The case was referred to Magistrate Judge John Gargiulo.

During the raid in June, officers of NPD and ACSO served a warrant to search the store and seized glass pipes used to smoke methamphetamine, glass pipes used to smoke crack cocaine, digital scales, hundreds of small zip loc bags commonly used to package narcotics, approximately 1 pound of high-grade marijuana and $24,232.00 in U.S. currency and closed the store for code violations.

A discussion of the store came about as Natchez Mayor Dan Gibson said he was concerned about the store’s reopening approximately two weeks ago and asked the board to take legal steps to have it declared a public nuisance and shut down for good.

“Before we go and try to close these people down, we need to do a little more research,” Frazier said. “Let’s do this in a legal way.”

In response, Gibson said he was sure that Callaway and the District Attorney Shameca Collins’ office would legally guide them through the process.

Attorney Walt Brown, who served in the absence of Natchez City Attorney Bryan Callaway during Tuesday’s meeting because Callaway was ill, said, “Litigation has ensued as a result of this incident and the city has been named as a party in the case of Abdulla Ahmed individually and others against the City of Natchez, the chief and the sheriff.”

Brown suggested the board “refrain from discussing the matter any further” while the litigation is ongoing.

“The City attorney Mr. Callaway is aware of it and steps are being taken to defend that litigation and it is best that we not discuss it anymore until that investigation is made and the litigation is at a point where we can discuss it,” Brown said.

However, Gibson said he met with Callaway about the lawsuit already and urged the board not to delay taking legal action to have the business closed.

“Marijuana was being sold openly across the counter next to a school and around churches, businesses and funeral homes,” Gibson said. “This has been a real concern to me and that business as of a week ago Friday has reopened. … We would like to authorize the Chief of Police and City Attorney, working with the sheriff and DA’s office, to appear in front of a judge for a public hearing to have this business declared a public nuisance and closed. … In the interest of the safety of this community … I would like to see this motion voted on and carried out.”

In other matters during Tuesday’s meeting, Natchez Police Chief Joseph Daughtry said organizers of the Hank Williams Fourth of July Celebration on the Natchez bluff were very pleased with how the event went. He said Arden Barnett, owner of the Ardenland entertainment company, was working to bring a carnival to the bluff in August and also “a great lineup of diverse acts for the fall.”

During the July 4, which sold well over 6,200 tickets, Daughtry said only two arrests were made for disorderly conduct and no automobile burglaries or other incidents.

He thanked Adams County Sheriff’s Office, Concordia Parish Sheriff’s Office and Vidalia Police Department for proving extra patrol throughout the city so that Natchez Police would not be overwhelmed.

“This event just fell in our laps,” Gibson said. “Hank Williams Jr.’s daughter is buying a lot of property here and she twisted his arm and convinced him to do a Fourth of July show here in Natchez and we weren’t going to say no to that.”

Daughtry said NPD would be participating in the National Night Out for Louisiana starting at 1 p.m. on Aug. 3, in which a caravan of law enforcement agencies will drive over the bridge towards Ferriday and circle back to Natchez to promote bridging the gap between the citizens of the area and the law enforcement community.

A second National Night Out event is planned for Oct. 5, on the Natchez bluff, Daughtry said.