First State of the City address set for July 23 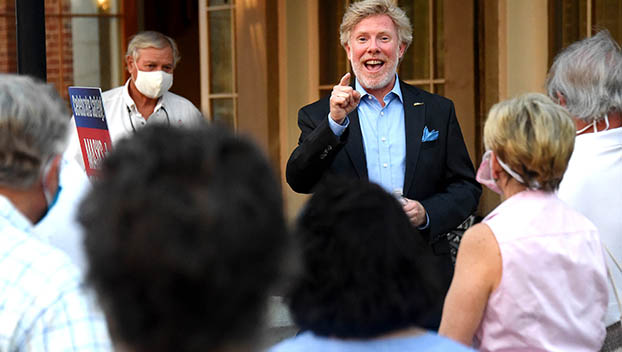 Dan Gibson talks to supporters outside the Natchez Grand Hotel Tuesday night before joining his victory celebration at the Natchez bandstand on July 14, 2020. (File photo | The Natchez Democrat)

NATCHEZ — In the past year, the City of Natchez has evolved from surviving a pandemic to thriving with a number of new developments and businesses, despite the circumstances of 2020, Natchez Mayor Dan Gibson said.

To celebrate, Gibson is giving the first of what he said will be an annual State of the City Address from the bandstand on the Natchez bluff at 5:30 p.m. Friday, July 23.

This will be followed by a party that Gibson himself is hosting at Rolling River Reloaded, one of Natchez’s newest restaurants owned by local party planner Robbie Cade-Furdge and her husband Maurice Furdge.

There, Natchez musician YZ Ealey and his band will be providing the night’s entertainment.

Additionally, the city has signed leases for the renovation of the historic train depot on Broadway Street into a restaurant and event space and docking space for three river cruise companies among other projects still in the making.

“I’m throwing a party and I’m inviting everybody to come,” Gibson said while broadcasting on WTYJ radio. “I want everyone to come out to the speech, celebrate our victories there and then follow us to Rolling River.”

Gibson said one year ago on July 14, he was elected to be the mayor of Natchez.

While much as occurred for the City of Natchez over the last year, Gibson said there is more work to be done. “If you look back from then until now, a lot of progress has been made. I’m excited and I invite you all to celebrate … (There is) definitely more work to do—much more. But we have made progress,” he said.