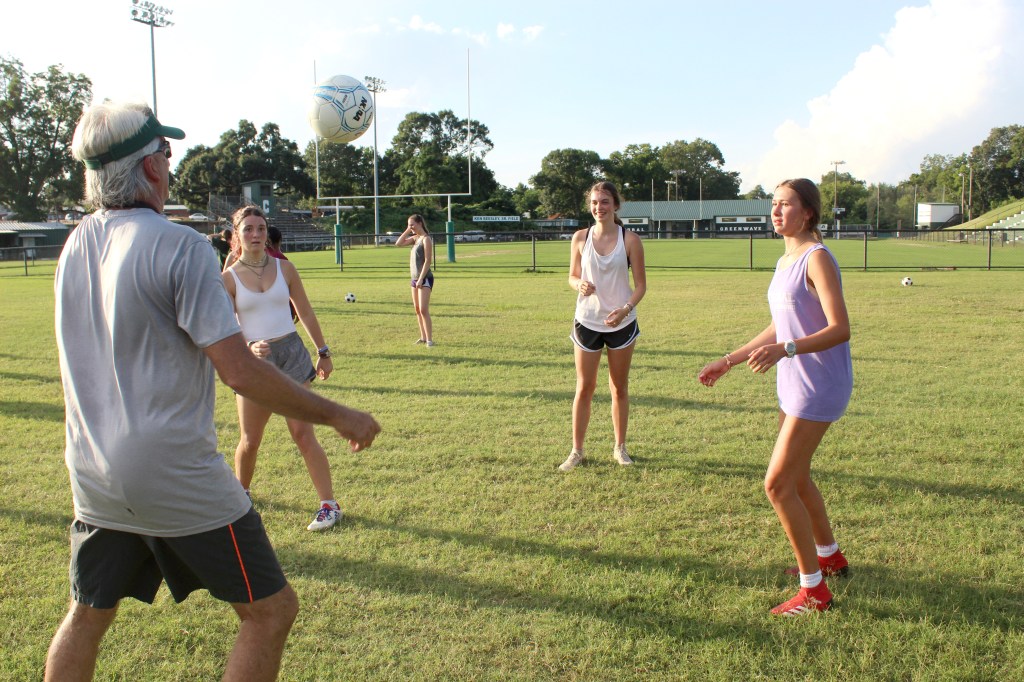 Cathedral’s soccer team practices behind the south end zone of D’Everux Stadium in the heat of the summer afternoon. Girls work on passing as head coach Dennis Hogue looks on.

Practice started July 5, and despite players going away on vacation, Cathedral has had about 14 to 21 girls show up each time, he said.

Only two players on the team have never played high school soccer. Everyone else has experience. Hogue said he expects a lot from the team because of their experience.

‘The first week, I was not letting them slack off,” Hogue said. “We have had to shake off the rust a little bit in our fitness. Our players have the technique and know what to do, so we did not cut them any slack. As soon as they realized they didn’t get any slack, they stepped up. I have been pleased with my girls.”

Over the last week, temperatures have been in the high 90’s, he said. In between drills, Hogue has made a point to educate his team about heat safety. Two coolers of ice-cold water provide refreshment to players.

During practice, if a player feels light-headed, they can sit down in the shade while applying a cold rag to their neck. Green Wave players get a water break to hydrate every 15 minutes. Hogue said the weather has cooperated for most of the practices.

“They have been calling for evening showers, so the last two weeks, we have had some overcast evenings. We have been lucky,” Hogue said. “A few times, we had light rain, and it did not get the field wet. We have made a point about heat safety because safety comes first.”

Cathedral has 10 seniors on its roster, he said. Izzy Dupre and Gracie Foster are seniors who play up top in the forward position. As best friends, they have a special connection on the field, Dupre said.

Dupre and Foster said they did not foresee high school going by so fast. They have played soccer since the seventh grade and have gone to soccer camps together. Dupre said forwards can drop back into the midfield, push up as strikers, or out into the wings. Having a sixth sense helps with positioning and playing two forward roles.

“We are up there together, and we know we are never going to get in each other’s way,” Dupre said. “We always have one person back and one person up. We just kind of flow like that.”

“We just know where each other are when we need a pass or help,” Foster said. “We cover each other and watch each other’s backs.”

Senior year is exciting for Dupre and Foster because they get to lead, they said. Hogue said they lead the team at the end-of-season banquet last year. A crushing defeat in the playoffs set them off, he said.

Cathedral got into the first round of the playoffs and faced East Rankin. When the full-time whistle blew, the scoreboard read 7-1. Hogue said Gracie and Izzy were tearing up and already telling the team how losing in the first round was not an option. They are ready for the season to start.

“I’m so ready for the season to start,” Foster said. “I’m pumped. My goal is to go to state and win, win, win, win. It made me want to work harder and win my senior year. “

Cathedral will essentially have the same team, Hogue said. His phone blew up with texts from his team the day Laurel Christian won the state championship. The Green Wave beat Laurel Christian twice, and players felt like they should have won state.

“They were saying ‘next year we are not losing a playoff match,’” Hogue said. “I think we have the skills. We have to stay focused and not get rattled under pressure.”