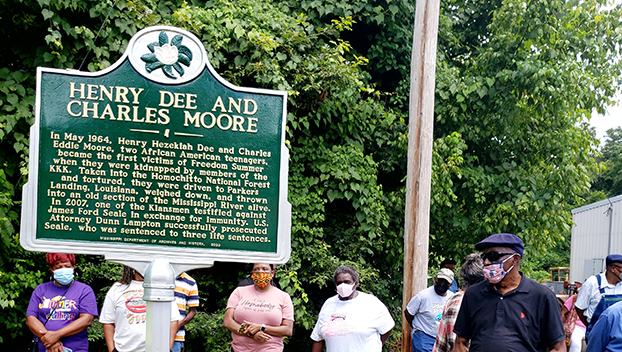 People gather for the unveiling of a historic marker off of U.S. 84 in Franklin County on Thursday. The marker is about the Civil Rights-era killing of Henry Dee and Charles Moore. Photo courtesy of Rashun Williams.

MEADVILLE — On Thursday, a Mississippi Department of Archives and History historical marker was unveiled off of U.S. 84 in Meadville, which commemorates the lives of two young men who tragically fell victim to the Ku Klux Klan in the summer of 1964.

Charles Moore and Henry Dee are considered to be the first two victims of Freedom Summer, a campaign in the United States launched in attempt to register as many African-American voters as possible in Mississippi.

On May 2, 1964, the two teenagers were kidnapped, beaten, tortured, weighed down and dumped into the Mississippi River while they were still alive.

Thomas Moore, Charles Moore’s brother, had the honor of unveiling the marker Thursday, 57 years after the incident.

At the unveiling, Moore said, “Today means the final recognition of them (Moore and Dee) being somebody and being loved by everybody.”

Moore, said he and his brother were only a year apart in age and were close. Charles Moore was 19 years old when he was killed. Moore said he was drafted into the army and was not around to hear wat happened until his discharge.

Justice for Dee and Charles Moore would not be served until 2007, when one of the Klansmen testified against James Ford Seale in exchange for immunity. Seale was tried and sentenced to three life sentences for the murders.

The same year, the event was translated into a documentary film called “Mississippi Cold Case” which was followed by a sequel in 2011 called “Reconciliation in Mississippi” by award-winning producer David Ridgen. While the first film highlights the tragedy, the second is centered around Moore’s reconciliation with the same men who had wronged his family.

Angela Williams, Assistant U.S. Attorney who helped prosecute Seales said that the monument was “long overdue,” and she is happy that the Moore and Dee family “finally found justice.”

E Rashun Williams of Meadville, who was at the unveiling Thursday, said she was only a child when the tragedy of Dee and Moore took place but recalled times when crosses burned and her parents telling her to hide from the bad men at points during her childhood.

“I, like many others who witnessed the unveiling of this sacred monument will remember the sacredness of it. … It is also reflective of the African American experience and collective identity as Meadville, Mississippi, citizens during the Civil Rights Movement era,” she said.

Moore said the tragic event is finally being given the recognition it deserves.

“It was never recognized the way I thought it should be until now,” he said.