Golfer Kenzie Wright supported by mom, boyfriend on the course 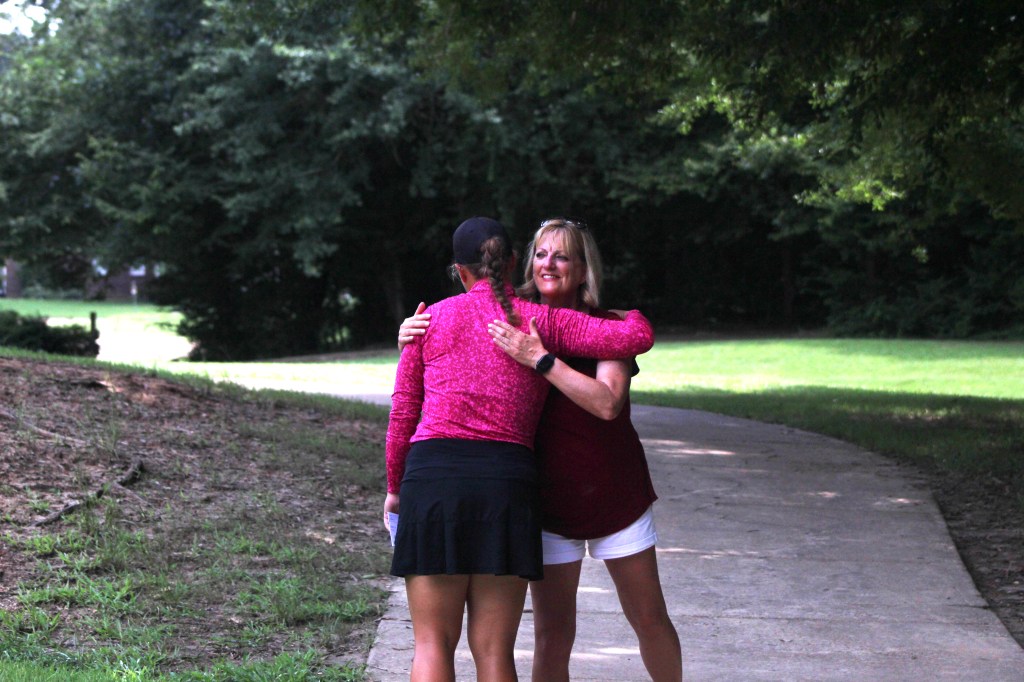 Kenzie Wright hugs her mom Andrea Wright after finishing the second round in the Natchez Golf Classic. Beau Pre is hosting the four round Women's All Pro Tour Tournament. Admission is free to the public. (Hunter Cloud The Natchez Democrat)

NATCHEZ — Professional golfer Kenzie Wright hugged her boyfriend Brayden Conover and her mom Andrea Wright after finishing her second round in the Natchez Golf Classic. She shot four-under in back-to-back rounds at Beau Pre Country Club.

Wright graduated from the University of Alabama, where she played golf, in May. She is a native of Frisco, Texas and won her first tournament at the Texas Women’s Open in June. Transitioning from college golf to professional golf has not been difficult, she said.

“It’s different because it is just me out here. I don’t have any coaches or teammates to help me along,” Wright said. “It is just I trying to figure out what works best for me. I am trying to figure all of it out. I have to plan my travel and practice rounds. It is very different, but it is also what I like to do. I like to do my own thing. It has worked out pretty well, and it has been an easy transition.”

Andrea had the week off so she was able to follow her daughter around the course for the Women’s All Pro Tournament. She said she watches her daughter as often as she can. She said it is a little more difficult to watch Kenzie in pro tournaments. “She is playing every week,” Andrea said.

Kenzie is planning to go to Q School in August, she said. As her daughter plays, she walks the course in flip-flops.

“They are more comfortable than tennis shoes,” Andrea said. “I just recently had ankle surgery, and flip-flops feel better. When it was raining, yesterday I only had to wash my feet. I did not have to worry about my tennis shoes being clean.”

Conover started caddying for Kenzie last semester in an individual tournament, Kenzie said. The test run worked well, so they kept working together, she said.

“He started caddying for me, and I have played well ever since, so we have kind of stuck with it,” Kenzie said. “Professional golf is a lot of being out on your own. It is always nice to have your family with you. Even if it is just him on the bag, it makes me feel so much more comfortable. It makes the whole process easier.

On Monday, the Wrights and Conover visited Pearl Street Pasta for dinner. Andrea said she ordered pasta, but her daughter and her daughter’s boyfriend ordered steak. “They just raved and raved about it,” Andrea said.

“It was the best steak I ever had in my life,” Kenzie said. “We have a deal now that if I’m under par, we get steak again. We will see if we end up at Pearl Street Pasta for dinner again.”