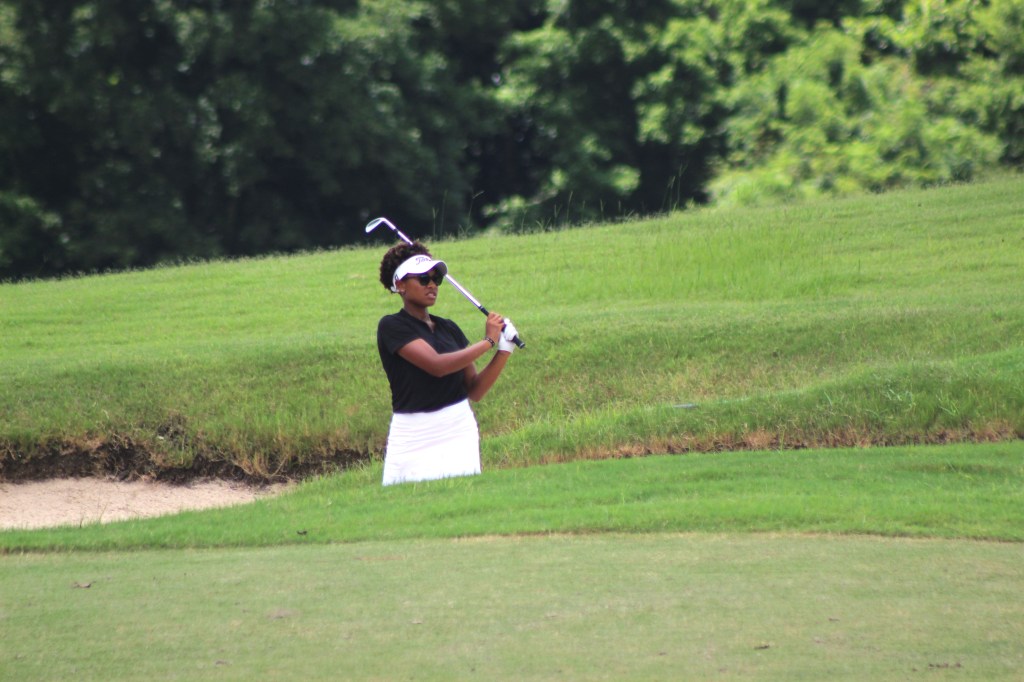 Ginger Howard watches her shot from the bunker on the 18th hole. Howard and Pauline del Rosario finished up their second round at the Natchez Golf Classic Wednesday afternoon. (Hunter Cloud The Natchez Democrat)

Golfers Pauline del Rosario and Ginger Howard were the first golfers off the Beau Pre Course in the second round of the Natchez Golf Classic. Rosario and Howard teed off at 8 a.m. Wednesday morning.

They rarely play together, Rosario said. Wednesday’s round is the second time they have been paired together in a tournament, she said. They had different finishes last week and feel differently about the tournament so far.

Howard said she had a strong finish last week when she placed third in the Texarkana Children’s Charities Open.

“I was feeling positive about my game,” Howard said. “After (Wednesday), I felt good. I left a few putts out there. It is a score-able course, but I feel good going into the next round. “

After the second round, Howard tied for 22nd at 2-under par. Playing partner Rosario had a great first round, and she finished the second round at six-under-par and tied for ninth place. Last week, she struggled in the Texarkana tournament finishing in 27th.

“I’m feeling pretty good considering what I got last week. I will take it,” Rosario said. “I will take anything under par. Tomorrow is another day, so I think we can work with that.”

Howard is a native of Bradenton, Florida and is familiar with the heat and humidity she faced on the golf course Wednesday. There was very little wind, which did get to her a little bit, she said. “It is just like home,” she said.

Rosario is familiar with the humid weather because water surrounds the Philippines. It has similar weather to Florida, she said. Wednesday, she wore a long sleeve shirt and pants because she did not want to put sunscreen on, she said. There is another way she stays cool on the course, she said.

“Sometimes, I bring an ice pack or bag of ice with me,” Rosario said. “It just keeps me cool because I get heat exhaustion. My body temperature gets too hot so ice packs help. Drinking electrolytes and water is an extra precaution.”

Natchez’s humidity has been sticky, they said. In addition, bugs have been a challenge. The heat challenges the mental side of golf, Rosario said. Golfers who stay cool and hydrated can stay focused, she said.

Drinking a lot of water has kept the golfers in good playing shape, Howard said.

“I have to have fruit, or else I will cramp up,” Howard said. “There is a lot of potassium in bananas, so I love bananas. Today I just ate apples. (For me) eating potassium and Vitamin C like crazy the day before helps.”