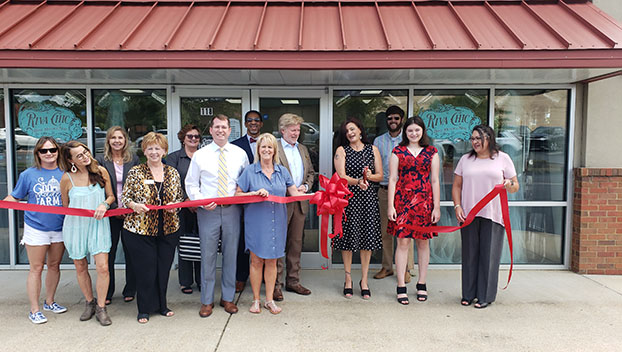 A crowd gathers to celebrate as Riva Chic owner Lucy Warren cuts a ribbon at her store on Wednesday. (Sabrina Robertson | The Natchez Democrat)

NATCHEZ — Riva Chic, a new business next to Soda Pops at the Natchez Mall, celebrated its grand opening and ribbon cutting on Wednesday.

Riva Chic is a furniture store, but much more than that.

Owner and founder, Lucy Warren, utilizes her unique painting skill to flip old furniture into stylish new pieces. She can flip your furniture, too.

The store also carries a variety of hand-crafted, décor and gifts from area vendors, such as bottles, mugs, pillows and greeting cards.

Warren also stocks and sells her paint of choice, a premium chalk paint by Annie Sloan which Warren said she couldn’t find within an hour drive from Natchez.

“Lucy, wow. I’m just blown away at how you’ve taken an empty space and created this,” said Natchez Mayor Dan Gibson at Wednesday’s ribbon cutting. “We welcome you to Natchez. We needed this. We needed you. … We’ve already adopted you as Natchoosians and I’m a Natchoosian myself. It’s one thing to be born here and this is where you are, but so many others like you and me are making the conscious decision in choosing to be here.”

The store emanates Warren and others’ artistic ability with items that shoppers can use to brighten their homes. Gibson noted that he would be returning to the store around Christmastime to go gift shopping.

“You have a real talent. Not anyone can do this and you’re going to bring beauty to so many homes here,” he said.

Warren said she worked in corporate desk jobs most of her life and painted on the side until last year. With the help of her husband, Kevin, she started her entrepreneurial dream full-time.

“I had a dream and wanted to open up my own store. I started doing this, flipping furniture, on my own and selling it on marketplace and then all of the sudden people started hiring me to paint their furniture. I’ve been painting furniture for years — just different techniques that I do — and here I got to do a little more,” she said.

Riva Chic was first located in Kentucky, where she and Kevin moved from. The couple moved to Natchez in January after Kevin Warren was named publisher of The Natchez Democrat, Brookhaven Daily Leader and the Prentiss Headlight.

Riva Chic had a soft opening of its Natchez location last month.

Warren also moves to Natchez with their adorable dog and under-the-counter assistant, Lacee, who even has her own little window built into the cash wrap so she can greet customers.

The store got part of its name, Riva, for an area in Croatia, in honor of Warren’s father, a Croatian. “Chic,” meaning fashionable, is Warren’s way of describing the unique treasures found at her store.

Warren was raised in Chicago and her ethnic background is Croatian, she said.

“My whole family lives in Croatia and I speak, read and write this language. I have a mom and two sisters who live in Chicago but the rest of our family is in Croatia,” Warren said.

“I have a lot of customers who’ve been interested in me teaching them how to paint,” she said.