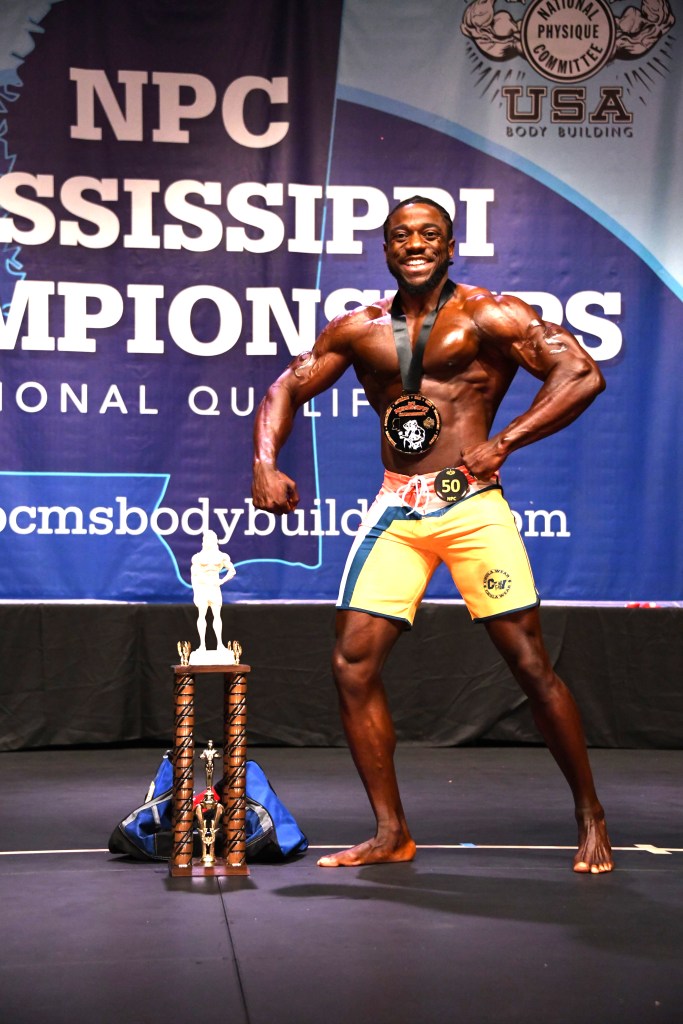 Champion body builder Christian Brown serves the community as Adams County Christian Football Strength and Conditioning Coach. He performed under the lights for the first time as a body builder this year.

At the Mississippi State Championship Show, he took first place in the division Mr. Mississippi Mens Physique on July 17.

“This is my first year competing,” Brown said “I signed up for it to see how well I would place with the other people in the division and the state. I wanted to use the show to see where I stand. I had no expectations of winning it for my first time competing in it.”

At pre-judging, he was closest to the center spot, which in bodybuilding means you are in first place, he said. The results can change in the final round of judging, but they will not be drastic changes from sixth to first, he said.

He had five hours between pre-judging and the final rounds of judging to keep the same physique, he said. His coach gave him a precise meal.

“My coach gave me a meal with a little bit of sodium and I had 8 ounces of water I could drink for like eight hours,” Brown said. “When the show was over, the only thing I wanted to do was eat.”

After the show his coach gave him the week off to eat whatever he wants, he said. His meals during training are packed with carbs, proteins, vegetables and fruits. Eight ounces of ribeye and asparagus were his typical meal before going to bed, he said.

Bodybuilding is a sport of patience, he said. It took him three years to transform his

body. In 2018, he started training and in May he competed in his first show, he said.

“It is a test of aesthetics,” Brown said. “In body building it is not a competition to see how strong you are. It is about how good you look and how good you present yourself. “

His journey to becoming a body builder began after his career in football at Alcorn State came to an end in 2017. Lifting weights in a gym, a man came up to him and asked if he competed in bodybuilding, he said.

“I did not realize body building was even a sport. I was totally lost and confused,” Brown said. “I had no clue that body building was a sport. I went home and I researched it myself. I was like ‘wow they really have a sport for people who workout and eat right.’ I just decided to 100% get dedicated to the lifestyle. If those guys can do it I know I can.”

After winning Mr. Mississippi Mens Physique, his next goal is to earn his pro card to compete as a professional bodybuilder. Professionals get paid through sponsorships, he said. Brown said Eternal Nutrition, Body of Christ Fitness and FitChef sponsor him.

Brown said he was at the school one day and ran into David King who asked him to be their strength and conditioning coach. He has been the coach there for the past three football seasons.

“I love it,” Brown said. “I get to be around kids. I played football myself and it keeps me around the game. Just to see the drive in those kids it just reminds me of when I was younger. You are in high school and it is the Friday night-lights. I love to see them go after their dreams. To help them achieve their goals is an absolute blessing.”

Football is the only sport he works with, he said. Several of the ACCS players follow him on social media. Sometimes, he can see them trying to pose and flex like him, he said.

“I can see them in the back practicing my pose and I am dying on the inside,” Brown said. “It makes me feel great. At least I know they are out there watching and they are being inspired. Who knows, there may be another Mr. Mississippi coming out of this area.”