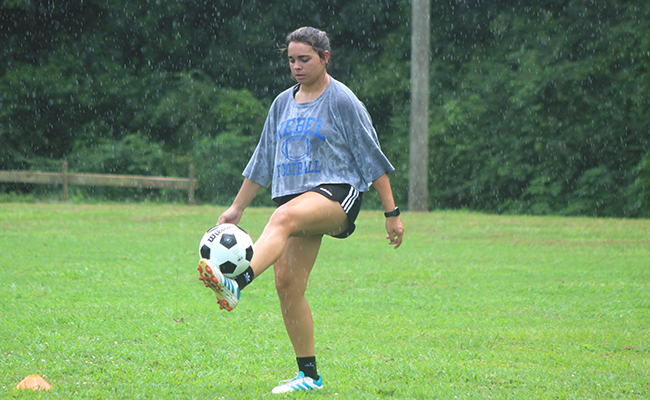 Adams County Christian School has been practicing in hot and muggy conditions in the middle of the day leading up to the 2021 fall soccer season.Senior center-back Maddie Campbell said practicing in the heat has been good for the team.

Their team of coaches have worked to keep them prepared, she said. The Rebels kick off their season with an away game against Laurel in just three days, and she is ready.

“I’m excited since it’s my last first game. I love playing soccer,” Campbell said. “I enjoy it the most. I’m sad that senior year is here because I’m not sure if I will play college. I’m excited to get the season started.”

After her high school career is over, she wants to study radiology and ultrasound. She is thinking about attending Jones Community College before going to the University of Mobile. Her mom Amy Campbell majored in radiology and is the assistant CEO at Merit Health Natchez.

When she is not playing soccer, she plays basketball, captains the dance team, and runs track. On the soccer field, her position is center back.

During practice Monday, she moved outside to the winger position, showed her offensive ability, and scored a goal. In games, she is mentally locked in on the game at hand.

“I will play wherever they need me,” Campbell said. “I focus on just the game. I never hear anything in the crowd. I always have adrenaline. I’m never nervous before a game.”

After their game against Laurel on Thursday, they will travel to Starkville for a tournament Saturday. Playing in an out-of-town tournament is fun because they play someone new, she said.

Her hope is the tournament will improve the team and improve their physical condition.

As the final week of pre-season practices draws to an end, she is looking forward to getting back onto the pitch with her team. She enjoys the game of soccer and the people she shares it with.

“I love being out here with my teammates. It’s something I love doing. I love watching it,” Campbell said. “When I am watching it and get frustrated. I just want to get out there and play. It’s important to me. I thank God for giving me the talents and abilities to play. We pray as a team together before each game and thank him.”