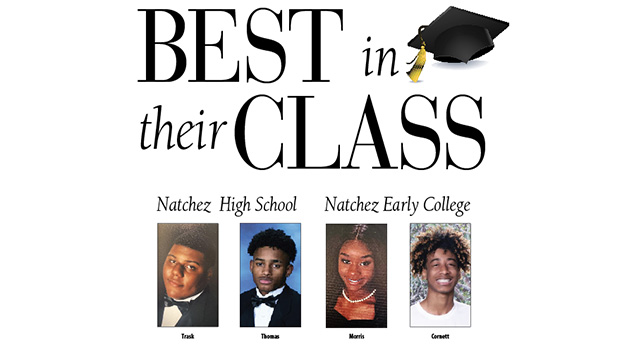 Natchez Adams School District Public Relations Director Tony Fields said more than 30 of those students earned two degrees last month and others earned ample college credits to give them a head start on their undergraduate courses this fall.

Cameron Brooks, a graduate of Natchez Early College, also finished school with his welding certificate and is ready for work, Fields said.

“We are so proud of all of our 2021 graduates,” he said. “Thirty-one students went above and beyond to obtain associate degrees and 48 students graduated with college credits. In addition, one student graduated with his welding certificate and is ready for the workforce. We honor them for their achievements and we wish them well as they go out and represent Bulldog Nation.”

Joshua Trask, Salutatorian at Natchez High School, plans to study a year at Copiah Lincoln Community College in Wesson on a football scholarship before finishing school at Mississippi State University in mechanical engineering, he said.

“I just had to have the mindset,” Trask said of balancing school with athletics and other extracurricular activities. “When it comes time to do something, you got to do it. I was also in Beta Club, Honor Society, Key Club, Math Club, Mayor’s Youth Council and Youth Leadership Natchez.”

Trask also said he would miss his high school class.

“When you’re in high school, you know everybody. In college, you don’t know anybody. You have to start over and make new friends.”

Trask said he is looking forward to playing football at Co-Lin and thanks his mom, Critena Bass, for being his number one supporter after his dad died when he was 9 years old.

“A lot of people helped me succeed, my mom being number one,” he said. “Also my aunt, sister, teachers and coaches.”

He played point guard on the Natchez High School basketball team while being a straight-A student in the classroom.

Thomas said he is also passionate about his science and would like to play basketball in college and become a cardio thoracic surgeon.

“I chose cardio because of my passion for science and the fact that people in my family have had heart problems,” Thomas said in a 2019 interview, adding, “I want to be someone they can count on.”

Furthermore, they both were involved in extracurricular activities in addition to their academic courses, teaching them to balance play and a heavy workload before going off to college, they said.

Morris — who played soccer, track and field and cheered throughout high school — said

she plans to join the cheerleading squad at Alcorn State University while she prepares for nursing school.

She has a lot of family in the medical profession and always knew she wanted to follow their footsteps, Morris said.

“I always kind of knew that I wanted to work in the hospital. As I got older, I started to look at different professions in the medical field and I kept coming back to nursing. Everyone always told me I looked like I would be a nurse. COVID actually made me want to be a nurse even more. Seeing frontline workers work that hard and be there through the pandemic made me want to be a part of that.”

Morris said she loved all of her science classes at Natchez Early College, particularly her advanced Human Anatomy and Physiology class.

“I had a really good instructor (Denise Thibodeaux),” she said. “She made everything stick.”

Morris said one of the things she will miss about high school is seeing her friends, teammates and coaches. During the weekends, between practice and school, Morris said she would always try to have a social life and spend time with friends.

“It wasn’t hard to balance everything because I always tried to stay on top of things,” she said.

Her parents, Willie and Frankie Morris, were the ones who encouraged her if she ever felt overwhelmed, she said.

Morris said her competitive high school class also pushed her to be a better academic.

“It was like a competition that kept us all on the right track,” Morris said. “I’m Looking forward to seeing how well I do with balancing cheering on a collegiate level and seeing how I change as a person throughout college.”

Like Morris, Cornett — the son of Joyce and Alton Cornett — said he has been busy preparing to go to college at Alcorn State since his graduation last month.

Cornett said he is now taking a 10-week STEM course at Alcorn State and is planning to major in engineering with a geospatial technology concentration.

Cornett said he enjoys programing and coming up with different designs for new technology.

In high school, one of his favorite classes was chemistry because of the lab experiments involved allowed him to work hands on, he said.

He also played baseball and ran cross country. It was a heavy schedule, he said.

“I would go to school from 8 to 3, practice and then I would come home and study. That was repetitive the whole school year.”

Cornett said he would miss seeing his classmates and teachers everyday but is looking forward to meeting new people and the new skills he will learn in college.

“It was a good group of people and friends to be around,” Cornett said of his class. “Everyone was basically like a family. We all worked together as a family.”