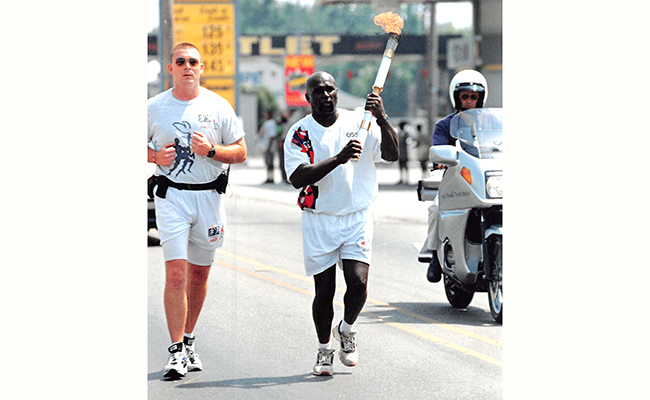 Henry Harris, center, carries an Olympic torch in Columbia in 1994. To the left of Harris, a state trooper runs with the torch to keep it protected and lit. (Submitted Photo)

NATCHEZ — The 2021 summer Olympics mark 27 years from when Natchez tennis coach Henry Harris carried the torch for the Atlanta Olympics in 1994.

Fellow tennis coach Jeanie Peabody had the honor to carry the torch in the same year.

“She’s the mother of tennis in Natchez,” Harris said.

A former Natchez tennis player worked for Coca-Cola and nominated them to carry the torch. Peabody ran in New Orleans, and Harris ran it in Columbia, outside of Hattiesburg.

He said the torch was aflame as he carried it. Two state troopers ran with him and the torch.

“They brought it in from Louisiana. It was the first city in Mississippi to run with it,” Harris said. “(The troopers) were in shape. They guarded the flame and made sure it didn’t go out.”

He estimates he ran a quarter of a mile in his carrying of the torch. The torch was not heavy, he said.

Carrying the torch did not set in for him until Muhammad Ali lit the flame in Atlanta. It was a connection for Harris and took him back to when he was a police officer in Natchez.

At the time Ali was acting in a film and was staying in a home in Natchez. He had heard stories about Mississippi and wanted security. Harris was one of the guards who kept watch.

Harris said Ali was not boxing at the time, but he still ran every morning. His route would be down US 61, he said. The 1994 opening ceremonies triggered those memories.

“After being his bodyguard, I’m looking, and I see him pop up. He was shaking as he lit the torch because he had Parkinson’s,” Harris said. “I was thinking ‘Wow I have had two chances to be with Ali.’”

Carrying the Olympic torch is second on his list of great personal moments. First place was when he became one of the first Blacks to play football at Copiah-Lincoln Community College, he said. The third biggest moment for him is serving children in the community.

Every four years, he relives the moment and memories of carrying the torch. Seeing Ali light the flame in the opening ceremonies will always remain his highlight, he said. The Olympic torch is a physical reminder he has kept.

“It’s at my sister’s home in Ferriday,” Harris said.  “She takes it to school sometimes to pass around her class. You get to keep the torch you run with, but you have to buy it. I think it was about $150 or $250. They didn’t take the gas out of the torch, so I would light it and pass it around so the kids could feel what it is like to carry it.”