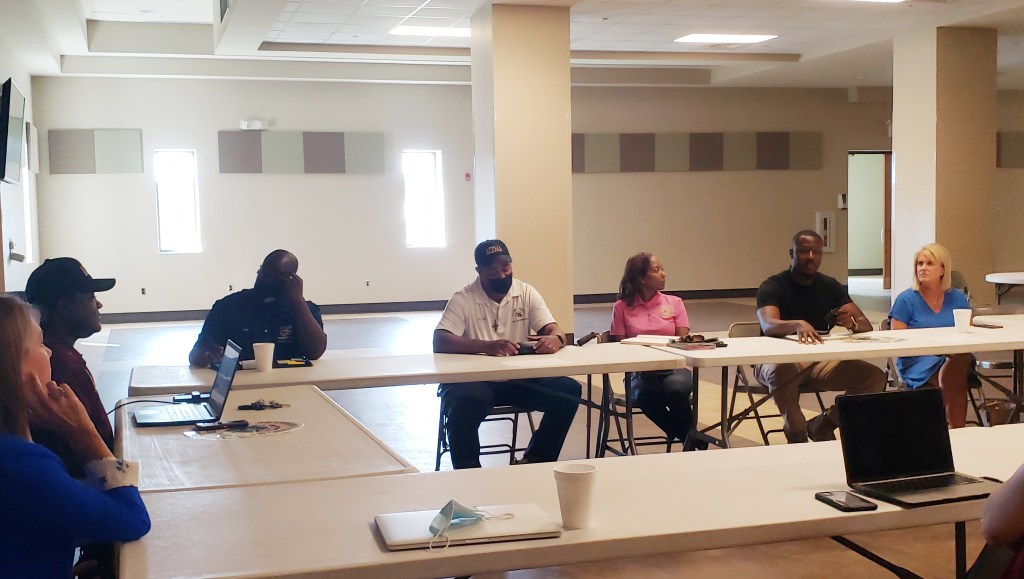 Thursday at the Adams County Safe Room, Natchez-Adams County COVID-19 Task Force members meet for the first time since the onset of the delta variant spread in Mississippi to discuss ways to mitigate community spread of the virus. (Sabrina Robertson | The Natchez Democrat)

NATCHEZ — The Natchez-Adams County COVID-19 Task Force met Thursday for the first time since May to discuss ways to mitigate the spread of COVID-19.

The task force ended its meetings after COVID-19 vaccinations became widely available and the Adams County Board of Supervisors did not renew a resolution requiring masks in public.

Represented in the task force are elected leaders for the City of Natchez and Adams County as well as medical professionals, school officials and first responders.

Adams County Emergency Management Director Robert Bradford, who is heading up the task force, said his primary reason for doing so is because of the widespread increase in COVID-19 infections with the onset of the Delta variant spread throughout the State of Mississippi.

In the past, members of the media have not been invited to attend task force meetings because members would share confidential information about infected individuals in order to make informed recommendations to elected officials, Bradford said.

This time, however, Bradford said he invited the media to attend because they would not be sharing such information. Instead, they are discussing ways to get the truth out about COVID vaccinations.

“We need to get as many people vaccinated as we can,” Bradford said. “That is going to be the key to preventing this spread.”

Although the Mississippi State Department of Health issued new guidance Wednesday recommending that everyone — vaccinated or not — wear masks in indoor public settings, the task force did not discuss a mask mandate on Thursday.

Instead, their primary concern is combating false information that is being shared on mainstream and social media about COVID vaccines.

“The real struggle (with this campaign) has been, what should our message be?” he said. “It’s easy to say the old message, ‘Do the right thing. Save yourself. Save your community.’ But those catch phrases have really not worked.”

Gibson said many who have not received the vaccine at this point are scared.

“They’re very unsure and they’ve lost all confidence in the health department and the CDC,” he said. “It has become a political thing and that is a real challenge. We’ve got to make sure that we’re educating and giving statistics. … Even if someone gets the Delta variant in the United States, it’s a one in 127,000 chance that they will have to be hospitalized (if they are vaccinated.) That, to me, shows that the vaccines are effective.”

Another issue, Gibson said, is many of those who won’t get vaccinated are the same people who won’t wear a mask.

“And they are the ones who should be wearing masks,” Adams County Board of Supervisors President Angela Hutchins added.

State health officials said more than 90% of those who’ve tested positive with COVID have been unvaccinated. State Health Officer Thomas Dobbs said Wednesday that the state is also beginning to see an increase in breakthrough cases — COVID cases in people who are vaccinated — as the Delta variant spread among those who are unvaccinated has “spilled over” into groups who are vaccinated who are older or have health issues that cause them to have weakened immune systems.

They also discussed broadcasting up interviews with local physicians about COVID vaccinations so that they can address people’s fears about getting vaccinated.

Supervisor Wes Middleton said people would listen better to their local doctors. Middleton said he chose to take the COVID vaccine because he contacted his doctor to ask questions about the vaccine instead of listening to social media.

“The message we should be putting out there is turn off the news and social media, where a lot of people are getting misinformation from, and call your local doctor,” he said.