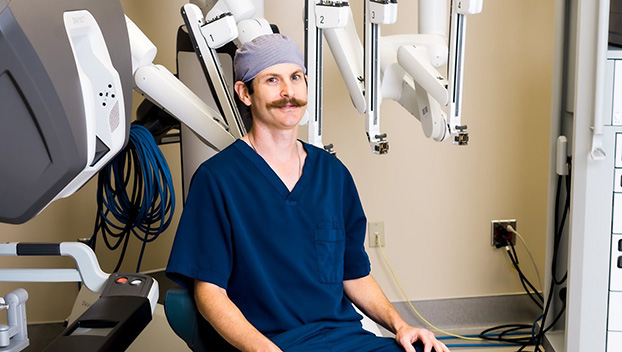 Natchez General Surgeon Dr. Christopher Martin has been on the front line of fighting COVID at Merit Health Natchez

NATCHEZ — A Natchez physician on the front lines of treating COVID-19 patients at Merit Health here told Rotarians the vaccines are safe and effective.

He also said he is not a “believer” that masks prevent the spread of COVID.

Wearing hospital scrubs and sporting an impressive mustache, Natchez General Surgeon Dr. Christopher Martin arrived at the Rotary meeting Wednesday at the Natchez Grand Hotel just in time for his presentation. He was asked to speak on the COVID situation in Natchez by long-time Rotary member Hayden Kaiser III, who introduced him.

He said the Delta variant is making its way through Natchez now.

The Delta variant is a mutation of the COVID-19 virus that was first seen in India in January, Martin said. It’s twice as likely to spread as the original Alpha variant.

“The symptoms are different. When you think about the symptoms of the Alpha variant we first saw, you think about loss of taste, loss of smell, high grade fever and a cough,” he said. “With the Delta variant, people generally have a runny nose, feel a little bit poorly, have a headache and a low-grade fever.”

For some patients, particularly those with co-morbidities or existing health conditions like diabetes, hypertension and obesity, the virus can have severe effects.

Martin said the vaccine is safe and has proven effective against the Delta variant of COVID.

“Yes, people are still testing positive for COVID after getting vaccinated, but they are not ending up in the hospital. To my knowledge, we haven’t had anyone admitted with COVID who has been vaccinated since we started doing vaccines,” he said. “That doesn’t mean there are not people who are testing positive as an outpatient, because they are. But they are sitting at home for a few days with a runny nose and feeling a little poorly. Then they are moving on.

“We have a telemetry unit and an intensive care unit full of people right now (at Merit Health Natchez). We have three people on a ventilator with COVID we have quite a few others pretty much maxed out on oxygen support without a ventilator. But guess what. How many of them have had a vaccine? Not a single one,” he said. “So, the fear going around about the vaccine is, ‘Does it work? Well, they are getting it anyway, why should I get it?’ The answer is you should get it because it is keeping people out of the hospital and that’s just anecdotal evidence that I can go by just by going to work every day.”

Martin explained in layman’s terms how the mRNA — messenger ribonucleic acid — works to build immunity against the virus.

“It just means it’s a faster way for your body to respond and make the antibodies. The best example I have heard is it’s kind of like a Post-It Note. They have programmed the mRNA to attack the spike protein, which is basically just how the virus gets into your body. They create this mRNA to enter into the cytoplasm of the cell — the main portion of the cell. It does not go into the nucleus where the DNA is,” he said. “Basically, it goes in there and your body figures out how to make the antibodies against the viruses and then the Post-It Notes dissolve and disappear. It is not affecting your DNA. We are not growing new arms or limbs or anything like that because of it.”

Some concerns with the vaccinations have been overblown in the news, Martin said.

“The J&J vaccine got shut down for 28 cases of deep vein thrombosis. How many vaccines had been given — 8,739,657. You know what percentage that is — .0032 percent. As comparison, what is the risk of DVT if you give a teenager birth control? You have to take away a couple of zeroes,” he said. “We are OK with giving that, but people are freaking out over this exponentially lower risk vaccine. The vaccine has proven to be safe and it’s keeping people out of the hospital. I think that’s the main takeaway.”

Martin said the COVID virus, like the flu virus, isn’t going to go away.

“You do get frustrated, especially when the anecdotal evidence is we have a clear prevention for ending up in the hospital and the ICU on the ventilator,” Martin said. “Going up there every morning and back at night to flip these people over and doing all this work — yeah, you get a little frustrated when every single one of these people made a choice to not do the vaccine.

“How long are you going to shut down? Five years? Ten years? It’s still going to be floating around. You’ve got to build up immunity and the best way to keep people out of the hospital is with the vaccine.”

In contrast, Martin said he does not think wearing masks prevents the spread of the COVID virus.

“Is a mask going to work? Unlikely. If you are coughing off droplets, yes, it’s going to keep that off, but any kind of airborne virus,” a mask will not protect against it, he said. “I am not a believer.”

Martin urged people to take care of themselves and get preventive care.

“Control your diabetes. Weight is an obvious co-morbidity. After the initial month, for the next 12 months, we could tell the people who were going to have problems. It was the people who had bad diabetes, those who were obese,” he said.