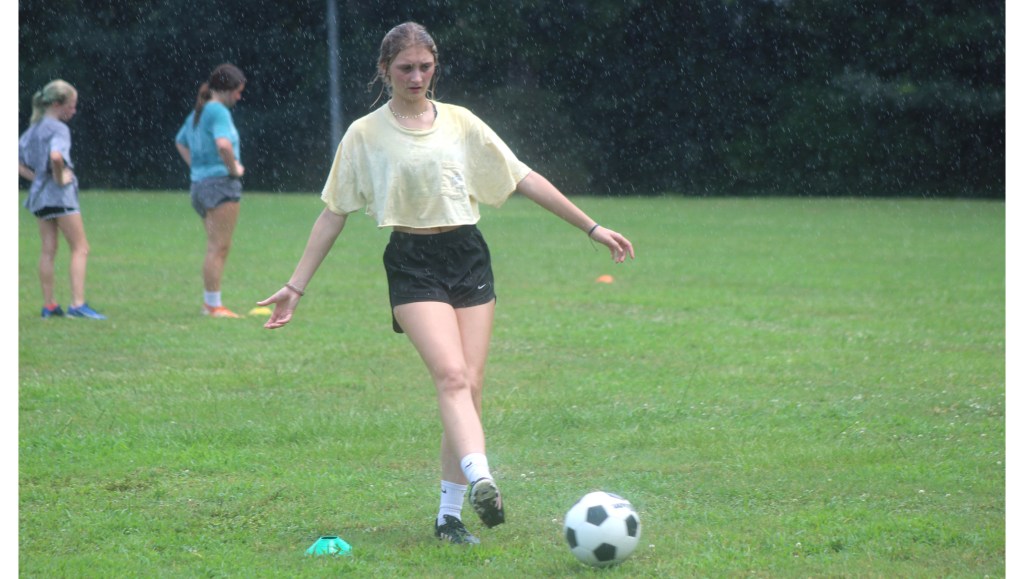 Rebel senior Sara Gordon goes through a drill in the rain at practice Monday. She is excited for the season’s first game against Laurel. (Hunter Cloud The Natchez Democrat)

Adams County Christian School’s Sara Gordon has spent every year of her career in soccer playing for the Rebels.

She is a veteran defender and takes up the left-back position on the pitch. Five years ago, she moved from the Vidalia Public Schools.

“When I registered here, I was looking for a sport to play,” Gordon said. “David King pointed over to the field, and I saw the soccer players, and I fell in love with it. I’ve been playing ever since.”

Over the last five years, she has put in a lot of hard work and effort. Soccer has been a great learning experience, she said.

As a defender, she can see the whole field and the game as it develops. Defenders and the goalkeeper have to communicate to their midfield and forwards.

“It is always fun when you clear a ball and pass it to my striker, and they create a goal,” Gordon said. “It starts from the back and works its way to the front.”

Thursday afternoon, the Rebels played Laurel in their season opener. She said she was excited about starting the season at practice the Wednesday before the game. If the team continues to push hard, they could have a successful season, she said.

“I would love to go undefeated and go to the playoffs,” Gordon said.

Rebel Alumnae Emily Williams is a soccer player she has looked up to, she said. Williams played soccer at Southwest Community College after graduating from ACCS and helped Gordon grow as a player.

She has played every position on the team and even played goalie last year. A defender at heart, the most memorable moment in her career also came from the backline.

“I can adjust to any spot they need me at,” Gordon said. “We played Parklane Academy, and coach Jimmy was punishing us. We only had 8 or 10 people on the field, and I came up from the back and scored a goal. It was just awesome.”

After graduating from ACCS, Gordon plans to go to Mississippi State and become a nurse, she said.