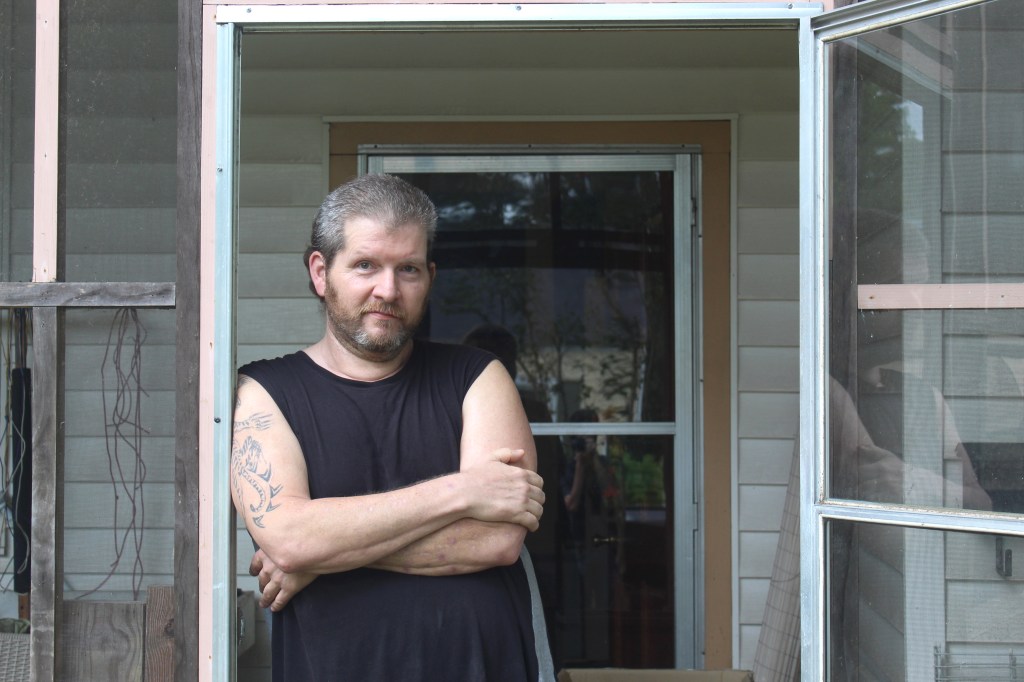 Lane Freeman stands outside his home at 557 Park Place in Natchez where The Dart landed Friday morning. His grandmother lived in the home when he was a kid, he said. (The Natchez Democrat)

Natchezian Lane Freeman stood outside his home at 557 Park Place, close to where The Dart landed on a Friday morning.

He has lived in Jackson, Vicksburg and Hammond, Louisiana. Natchez feels like home because of the memories he has here, he said.

When he was a kid, his grandmother lived in the house on Park Place. The home is a short bike ride from Duncan Park.

He said he remembers walking and riding all over the city as a kid.

“All my family lived here in Natchez,” Freeman said. “We would have Fourth of July, Thanksgiving, Christmas and New Year at this house. The food and company were nice. We used to play at Duncan Park too.”

Surrounded by trees, the neighborhood is pretty quiet, he said. A mourning dove called from a street light while other songbirds flew in and out of a small tree in his front yard. It’s the little things that make a difference, he said.

“Everywhere else I have ever lived you can’t see the sunrise up and come over the trees,” Freeman said. “You can’t hear the birds singing and squirrels barking. At night, you can hear crickets. In the city, concrete, buildings and traffic surrounded me. I thought to myself, ‘What am I doing living in the city,’ I liked the grass and trees around here, so I came to Natchez.”

In 2004, he bought his grandmother’s house. He has been working on making it better, he said. On the side of the house, he would like to build a deck for barbecues or to sit and relax on.

When he has spare time, he said he likes to build and rebuild motors. His home is filled with tools and building materials. Models such as cars, trucks, planes and jets are another way for him to work with his hands, he said.

“Building keeps my hands moving,” Freeman said. “I can concentrate when I’m building. When I get done building something, I like to look at it. It’s an accomplishment.”

Playing video games is another way he can keep his hands busy, he said. Among his console collection is a Nintendo 64, a Playstation 3, a Playstation 4 and an Xbox1. He said he plans to purchase a Playstation 5 soon.

Freeman said he also likes helping other people because it makes him feel good about himself.

Since moving back to Natchez, he lost his aunts and uncles on his dad’s side of his family. His brother died in 1997, he said. Now he has a bunch of cousins he has never met and two other close family members.

“All I have left is my momma (Patricia Clesi) and her sister,” Freeman said. “I take care of my momma. She was a nurse. All the years of walking up and down the halls in a hospital have taken their toll. Now, I try to do the best I can to help her out.”