Stands are a solution to hunters’ problems 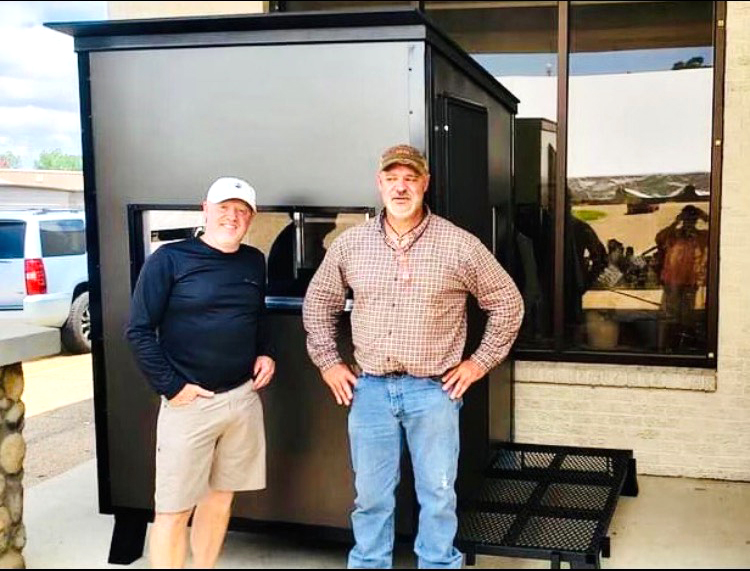 KT Outdoors was started by Kevnin Thomas, left, and Richard MicKinney, right, to provide a portable hunting stand that could be put together with ease. (Submitted Photo)

They grew up in Natchez together before Thomas left the area and moved to Alabama where he has a construction company and owns a race team. McKinney has stayed in Natchez and owns a lawn care business.

In November 2020, Thomas had bought a property on Ogden Road and wanted to put up a box stand for his wife to hunt out of. They looked at box stands to buy but did not have a way to put one in the woods.

“We came home and he said there has got to be a way you can put a box stand in there,” McKinney said. “Something that is portable and you don’t need all the equipment to do it. He is an architect, a designer and a builder. We sat out on my back porch until 1:30 a.m. sketching out ideas and designing it.”

Since launching their product, they have been out on the road to exhibition shows in Texas. Last week, they were in Birmingham at the World Deer Expo and had a great show, he said. Everything is built in Cullman, Alabama, he said.

The stand ships in a box with all the paneling and the tower system is on top of the box, he said. There are three tower systems, a 4-foot tower, 8-foot and 12-foot, he said. It goes from the box and into the air in half an hour.

“You don’t need tractors. You don’t need equipment,” McKinney said. “You don’t need six people to carry it. We did not cut any corners when building them. Everything is powder coated, felt instead of carpet interior. It is linexed. There is no wood whatsoever. The whole thing weighs less than 200 pounds. Each of the panels weighs maybe 25 pounds or so.”

Additionally, the roof weighs 30 pounds and the platform weighs 50 pounds, so a hunter could carry it piece by piece if needed. There are no fancy tools needed to put it together, everything can be done with one allen wrench, he said.

Avid hunters Mckinney and Thomas thought about all the trouble that comes with building a wooden box stand and designed a product that was not as difficult to build. With box stans that are not made of wood it eliminates any possibility of rotting. It is also helpful for McKinney to have a stand that is portable because he hunts land on the Mississippi River and can remove it so it does not flood.

The box stands do not have to be set up along the edge of a field but can be set up in the middle of the woods, he said. Their hope is to help get elderly people to enjoy the outdoors again and maybe create an opportunity for kids to fall in love with the outdoors, he said. On the edge of the platform is a safety rail to make the stand as safe as possible.

Now their challenge is keeping up with demand because materials have been hard to come by. Currently, they are securing dealers in Alabama, Texas, Mississippi and Louisiana. Locally you can find the stands at the Sports Center on Sgt. Prentiss Drive.

Looking back on the first eight months of the business, he did not think it would have gone as well as it has.

They hunt together and go with their wives on vacation together. Their wives Krysteen Thomas and Janee McKinney are best friends. Now, they plan to retire together on Lewis Smith Lake near Birmingham, Alabama.

“We are just childhood friends who got together to do this because we couldn’t get a deer standup on this place,” McKinney said. “We thought it could be something people could use and it has turned into something more than that… We couldn’t do this without the support of our wives. Our wives are all in and they are best friends.”