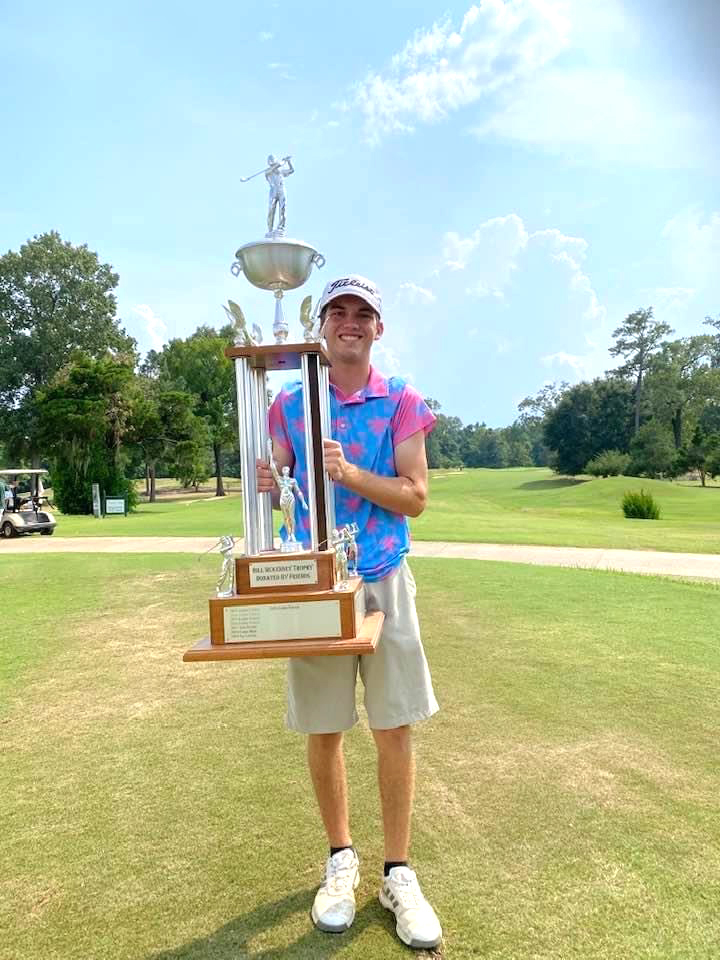 Chase Kaiser wore a colorful shirt to win his first city championship. He said the shirt will now be his final round shirt. (Submitted Photo)

NATCHEZ — Natchez City Champion Chase Kaiser said winning the tournament took a while to sink in. He blazed a nine-under final round at Duncan Park to take the title Sunday.

Walking to the final green, it did not sink in that he was city champion as tons of people watched him complete his round and make history.

“It didn’t hit me until this morning. I was in so much shock yesterday,” Kaiser said. “That is just something I have always wanted to do growing up, win a city championship. Yesterday, I was just in shock. I walked off the green and hugged my dad. I told him I’m sure granddad would be happy and proud of me.”

An 18-year-old, Kaiser would have been the youngest golfer to win the city championship had Lee Jones not won it at 15 years old.

He said his tournament win beats winning the MAIS State Championship as a senior this year. Kaiser shot a 67 on Saturday and a 63 on Sunday for 12 under par for the tournament. It is the lowest score in the city championship since the course expanded in 1993. He beat the previous record of eight under by four shots.

Mentally his record-breaking rounds were draining. On Monday, he was relaxing and unwinding with tv before he went to chip and putt, he said. Playing in the heat drains the body, so he made sure to stay hydrated.

“Trying to stay focused for even one round takes a toll,” Kaiser said.

Saturday’s round was not his best round of golf despite shooting three under. He missed several opportunities to birdie the “easy holes” and made it harder to make a good score, he said.

Sunday’s final round was the opposite of Saturday. He came out firing on all cylinders and birdied the first two holes. On Hole No. 6 and 7, he missed birdie putts and had to tell himself to calm down and be patient.

“I felt like I was hitting my putts exactly where I wanted to hit them,” Kaiser said. “I knew if I could make my putts on the back nine, I had a chance at a special round.”

The round was a bogey-free round meaning he shot par or better. The tournament was bogey-free, he said.

A Natchez native, he enjoys playing in front of his hometown. People following him on the course forces him to keep a sharper focus, he said. As word spread around the golf course, more people followed him to hole No. 18.

Pressure built inside him the closer he got to No. 2. Each shot had a little more weight attached, he said. To handle the pressure, he told himself to slow down and stick to his routine. Unless Hamm or Farmer shot 10 under, he said he felt he needed to par the final three holes of No. 3, No. 4 and No. 5.

“I birdied No. 3, and that was just the seal on the round,” Kaiser said. “All I wanted to do was par No. 4 and No. 2. When I pulled up to the green on No. 2, everyone was standing around the green. I have been up there for the past four or five years. I have watched all of these other guys be in the spotlight. To finally be there after all of this was just unreal.”

The tournament was a boost of confidence before he heads off to Mississippi Gulf Coast Community College. He moves in on August 17 and will play golf there. This summer, he has not played good golf until this past week, he said.

After getting back from the beach last week, he flipped a switch and told himself he needed a competitive weekend. When he shot a 67 on Saturday, it was what he needed. Sunday’s round came out of nowhere, he said.

Beau Pre is his home course, but he played about four rounds last week at Duncan Park in preparation for the tournament. He also worked on his short game for about six or seven hours throughout the week, which led to him lifting the trophy Sunday.

“It was not quite as heavy as I thought it was,” Kaiser said. “I was afraid I was not going to be able to pick it up.”

Wearing a bright purple and pink shirt with palm trees, the photo of him holding the trophy almost looks distorted. It was the first time he has ever worn that shirt in a competition round, he said.

“My mom was joking about it and said ‘that is your new Sunday shirt, that is your final round shirt for now on,’” Kaiser said. “I’m having a chill day today thinking about what I did. I have been talking to Tom Bryant about getting my mind ready for college tournaments. Yesterday, right before he left, he told me, ‘I want you to take some time and be proud of yourself and realize what you did.’ So that is what I’m doing.”