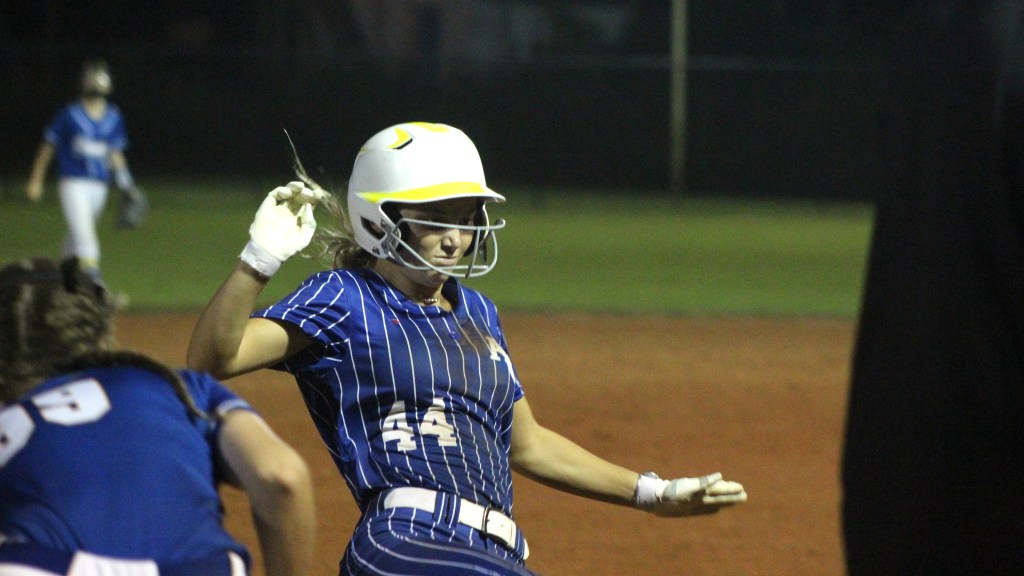 Georgia Martin slides into third courtesy of a double by Camren Strittman in the fifth inning. Martin and Kate Parsons are two players who are trying to lead the Rebels offensively but as a team they need an attitude change head coach Tate Lipscomb said. (Hunter Cloud The Natchez Democrat)

NATCHEZ — Adams County Christian School lost the first game of their doubleheader with Franklin Academy 13-0. The second game was a little bit of an improvement as ACCS lost 6-1 Tuesday night.

Several of the runs came as the result of arrant throws sailing over the third baseman’s head. A ground ball snuck through the legs of an infielder in the second game. It could have been an easy out in the second game. Poor defensive play is a result of their attitude, head coach Tate Lipscomb said.

“We bust our tail every week in practice,” Lipscomb said. “Then they come out here in the game and don’t care if it is day or night. They don’t have the heart. That is on them I can’t coach them to do that. They have to make their mind up that they want to change.”

There are some players already stepping up to take charge and lead a change. Juniors Kate Parsons and Georgia Martin battled in the batter’s box and picked up some crucial hits. One of those hits by Parsons sparked a rally in the fourth inning that scored the only run of the game for the Rebels.

“They are trying to be a leader and carry the team but it is tough right now,” Lipscomb said.
In the fourth inning, ACCS senior Laiken Davis bunted to move runners up. She reached on a fielder’s choice as the Franklin Academy player threw to third. A walked batter drove in a run to make it 4-1, but the Rebels could not push any more runs across the plate in the inning.

A double by Camren Strittman in the fifth inning moved runners into scoring position with two outs as the Rebels were down 6-1. The Rebels loaded the bases with a walk. No runners scored after a flyout to right field ended the game.

In total, the Rebels stranded six runners with the bases loaded and scored just one run. Runners stranded in scoring position was not the problem for ACCS offensively. Their struggle was the team’s approach at the plate, Lipscomb said.

“We had 20 strikeouts, and our approach to the pitcher was nowhere it needed to be,” Lipscomb said. “they need to go to the plate with a purpose and pay attention. They need to think, ‘How is she going to pitch.’ They need to look for a curve or something to hit and not say, ‘Oh god am I going to strike out.’ It is our attitudes that are the problem.”

An early three-game losing skid is no reason to push the panic button just yet. His teams have had some slower starts in the past, he said.The Rebels started their season with games against two state runner-ups in Franklin Academy and Bowling Green. Both schools are from Louisiana and play in the same division in the MAIS as the Rebels do.

“We do not play anyone easy out the gate,” Lipscomb said. “I expect the girls to get better and improve themselves. There is a lot of softball left.”