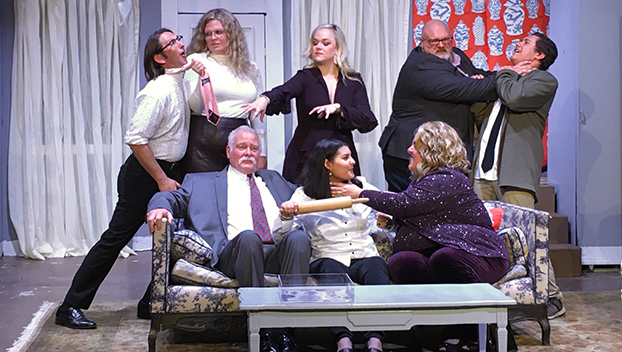 A comedic play written by Robert Roberts and directed by Micheal Ali, “Dilemmas with Dinner” is described by The Natchez Little Theatre as a “a sitcom style farce that will delight the family.”

The play details the struggles of Brooke, played by professional actress and owner of Olivina Boutique, Olivia Pate, as she tries to host a “picture-perfect” dinner in hopes of getting a promotion from her boss, played by Ben Burke and his wife, played by Morgan Groover.

Brooke employs the help of her injured husband Donny (Bo Allen), clumsy ex-employee Max (Anthony Morgan), a spiteful caterer (Scarlett Leake), and quarreling friends Julia (Julia Richardson) and Stephen (Devin Arnold). What ensues is a hilarious chaotic bundle of quick wit and slapstick humor as nothing goes according to plan.

Pate said at a dress rehearsal on Wednesday that the roughly two months of rehearsals and preparation has been lovely.

She said that getting to perform with old friends has made a sweet reunion after her return from acting school in New York. Pate also said she is excited to perform on opening night with the rest of the cast and to give the audience a time to sit back, relax and have a good time.

“(You) get to have fun with this cast,” Pate said. “It’s going to be really funny — really awesome belly laughs for sure.”

Director Michael Ali said the play will be a “first of its kind” at Natchez Little Theatre as he tries to change how the theater is marketed in Natchez. He said his intention is to give this play a “sitcom” feel in hopes of broadening the show for the audience.

“We’ve done comedies and we’ve done what you can consider a Faust. We’ve done this before at Natchez Little Theatre,” Ali said, “but this is one of the first ones where I’ve given the actors and actresses complete freedom to just be themselves.”

The show will be opening tonight at 7:30 p.m. at the Natchez Little Theatre with Friday and Saturday shows at the same time. The show will close with a 2 p.m. performance on Sunday.