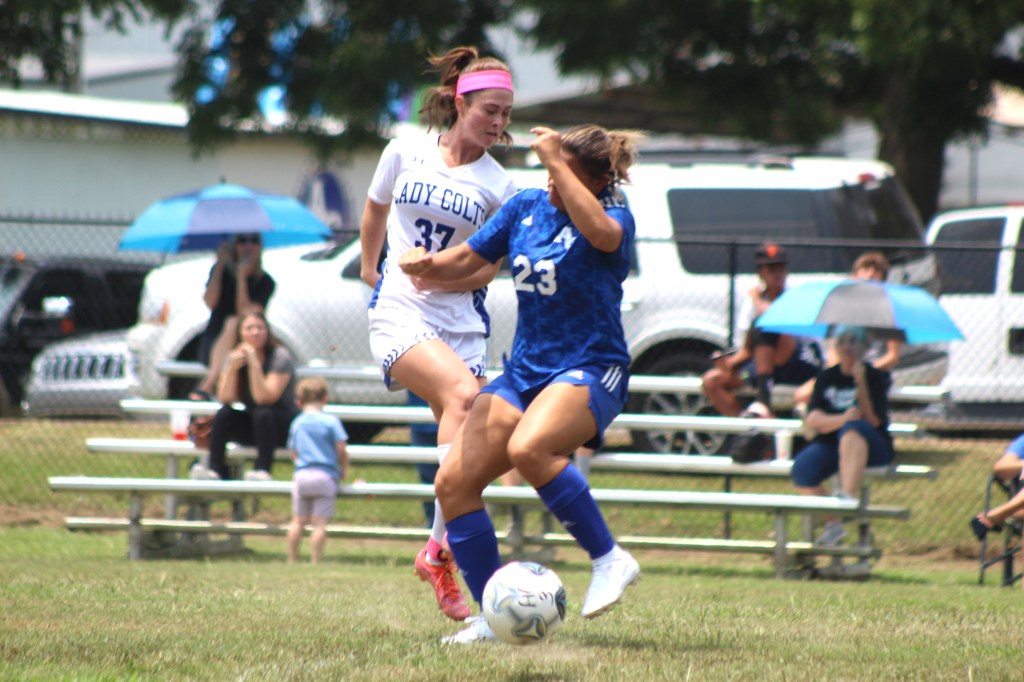 ACCS’s Maddie Campbell, right, collides with Bayou Academy’s Addison Vargas in efforts to make a tackle on the edge of her box in the first half. The Rebel’s senior defender made several defensive stops in the game. (Hunter Cloud The Natchez Democrat)

Adams County Christian School had to change their game at Bayou Academy to a home match played in the early afternoon due to the event Meet the Rebels. Bayou Academy ran away 3-0 underneath a scorching sun Thursday.

Heroic defending by Maddie Campbell kept the Colts off of the scoreboard in the first 15 minutes of the game. She stepped into multiple tackles without fear and acted as the backbone for the defensive line for the majority of the game. It was what head coach Pam Weatherly expects from the senior defender.

“This is typical Maddie mode,” Weatherly said. “She stepped up as a leader and showed her senior style. I expect to see more of the same from her this season.”

Bayou Academy’s Lacey Lusk scored the first goal for the Colts around the 20-minute mark after her shot ricocheted off the goalkeeper Reagan Lee. The Rebels failed to clear their lines in the buildup to the goal and trailed 1-0 at the first water break in the first half.

ACCS responded with offensive pressure. They created a shot on goal, which was saved by the keeper, following a forced turnover. ACCS boys head coach Jimmy Allgood and head coach Pam Weatherly could be heard saying “good job.” to their players from the sideline as they urged the team to attack.

ACCS did not give up after the second goal and went back to work trying to create more offensive opportunities through increased pressure. They needed better quality in the final third of the field, having just one shot on target at halftime.

Vargas scored the third goal for the Colts following a misstruck ball in the second half. She curled her shot past the keeper’s outstretched arms to put the Colts up 3-0.

The Rebels did have moments of intensity in the game. Overall, the Colts controlled momentum and possession as they are a tough side, Weatherly said. After facing each other in a tournament in Starkville last weekend, the Colts agreed to come to Natchez and play the Rebels. She said she had a lot of appreciation for their efforts to get the game in.

“They are a strong team and took the first place trophy at Starkville.” “ We played strong defensively but couldn’t get any offensive chances for our strikers.  I appreciate Bayou Academy for coming down here and playing us. I believe healthy competition always makes us better.