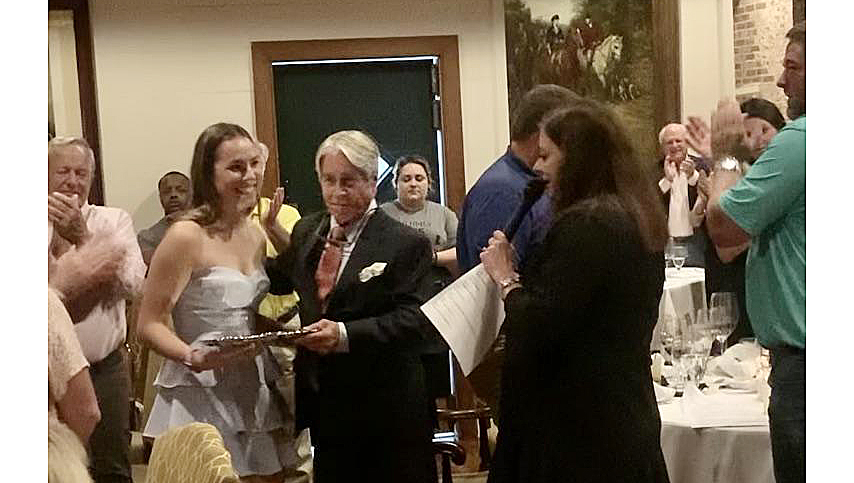 From left, 18-year-old Julia Eidt is presented an honorarium and silver platter by auctioneer Rusty Jenkins at the 14th annual benefit dinner for St. Jude Children's Research Hospital. The dinner took place Sunday at The Castle Restaurant at Dunleith and raised more than $41,000 for St. Jude. (Submitted photo)

NATCHEZ — More than $41,000 was raised to help kids beat cancer this week at the Annual St. Jude Benefit and Live Auction at The Castle Restaurant at Dunleith.

Over a span of 14 years, the community of Natchez has raised more than $500,000 for St. Jude Children’s Research Hospital at the annual benefit dinner.

This year was “extra special,” said organizer Lyn Jenkins. The honoree for which the benefit was created, Julia Eidt, celebrated her 18th birthday on July 12. Eidt was diagnosed with acute myelogenous leukemia at the young age of 2, which she battled for a period of seven months.

The event originated when Julia was four years old and in remission. Wanting to give back to St. Jude, the owners and the staff of The Castle reached out to Julia’s parents, Jenn and Wray Eidt, and asked to hold the annual benefit in her honor.

Each year, as the finale of the fundraiser, participants bid on a “traveling” silver platter and the winner of this precious item has their name engraved on it.

“The auction this year was extra special because Julia Eidt turned 18 and the platter was presented to her,” Jenkins said. “We did an honorarium with St. Jude for her birthday present that will be presented to her instead of the platter auction this year and it raised $9,657.00. Along with the auction and dinner attendees, we raised over $41,000 this year, bringing our grand total to over $500,000 for St. Jude. This is amazing because we limited our auction items to have Julia and her family speak at the dinner, honor all of the previous donors and present the platter to her.”

Jenkins said all of the other auction items are 100 percent donated so that St. Jude received all the profit from the fundraiser. The value of each the auction items varies from $700 to $4,000. Auction items this year included luxurious destination vacation packages, paid for dinners, flowers, wine, and a casting position as a background actor in the film “Rumble Through the Dark,” which is now filming in Natchez.

Derek Peterson cast the winning bid on the movie package, which also included a signed copy of Michael Ferris Smith’s novel, “The Fighter,” on which the film is based, compliments of Crooked Letter Picture Company.

Mitzi Conn cast the winning bid on a $4,000 vacation package, which includes a week-long stay in a three-bedroom condo at Orange Beach, courtesy of Jimmy Smith; pizza and gas courtesy GoMart; a beach blanket from Olivina and Yeti mugs from Sports Center in Natchez to use on the trip.

Owners and staff at Dunleith also donated the venue for the fundraiser and their time for serving the food which was generously given by Sysco and U.S. foods and wine donated by EJ Gallo family of wines, Jenkins said.

“(Julia) will be attending Ole Miss this fall and majoring in Physical Therapy,” she said. “She would eventually like to work at St. Jude and help other patients like she was helped when she was younger.”

Jenkins said they plan for the benefit to continue to impact other children’s lives in the years to come.

“We will have a benefit in the future with hopefully the same format and a regional child that has been to St. Jude,” she said.