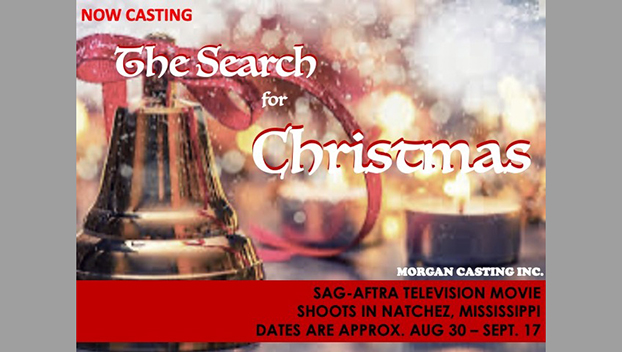 Natchez — Filmmakers want to make the upcoming Hallmark movie to be as “Natchez” as possible by recruiting local cast members and businesses to be featured on screen.

Daniel Lewis with Evergreen Film Productions said the movie is set in Natchez and the company wants to showcase as much of the community as possible. They are seeking out local business storefronts to be decorated and used within the film.

“The businesses that are going to be featured, we are not changing their names,” Lewis said “They are going to get a lot of exposure.”

The company said businesses that participate would be getting international recognition and tourism exposure by being featured within the film.

The movie is set to have filming locations Under the Hill, the Bluff, Memorial Park, Franklin and Main Street, as well as cross streets from Canal to Rankin.

The crew would be shooting scenes around downtown from Sept. 6 to 17, so stores would need to be decorated by that time. Any businesses in these locations that are interested in having their storefront in the film should contact the company at NatchezChristmas21@gmail.com to be considered and prior to decorating so that consulting with the film’s director/production designer can be involved in the process.

Lewis also said that the film has opportunities for businesses within close proximity to the downtown area to be featured as well.

“It’s not just downtown business owners” Lewis said, “We are going to have street vendors so those businesses that might operate a couple of miles away from downtown and still want to be a part of it, we are going to let them set up a tent with a table and put their business signage there so they can get exposure as well.”

Businesses are not the only part of Natchez that will be getting exposure. Daniel Lewis also said that residents and families of Natchez will have an opportunity to become extras in the film. There will be opportunities for speaking roles as well.

Evergreen Film Productions said that it wants “as many Natchezians to be seen in the film as possible” by opening opportunities for locals to become extras in the film. The film will have both volunteer and paid extra positions and filmmakers encourage people of all ethnicities and ages to apply.

To apply, individuals must send an email with the following information to natchezbackground@gmail.com.

The email should include the participant’s name, age, photo, their availability between Aug. 30 and Sept. 17 and their vaccination status — which is not required for film participation.

Evergreen Film Productions is also seeking local hires to be cast in speaking roles. Matthew Morgan with Morgan Casting said that auditions are now open for the following speaking roles:

• Allison: A female in her 50s, and playing Charlotte’s birth mother. The actor will need to be a familial match to Charlotte, played by Erin Cahill.

• Miss Gloria: Female, 70s. Warm and charming and knows her stuff as a courthouse records clerk.

• Cathie Brendel: Female, 50s. Works at the Children’s Bureau and is helping Charlotte track down her birth parents.

• Helen: Female, 30s. A friend of Charlotte’s from high school.

• Mr. Weaver: Male, appearing to be in his 70s to 80s. Still quite spry, a man whose home is full of local art and local relics.

All actors in speaking roles are paid. Applicants must email their profiles for consideration to CastingTSFC@gmail.com by Friday, Aug. 13, at 5 p.m. Only fully vaccinated actors — excluding minors — will be engaged for speaking roles as per the production’s COVID-19 policy. Morgan Casting requests that each email include a subject line with the applicant’s name and the role they are auditioning for, and in the email include their name, photo, current city and state of residence, height, and phone number.

Anyone interested in a speaking role should research the actors named in the description, in order to ensure that the role is a good fit to look like the family or the “younger” childhood version of a character.

For more information and updates about casting sessions and the film, visit the Evergreen Film Productions Facebook page at www.facebook.com/EvergreenFilms19.