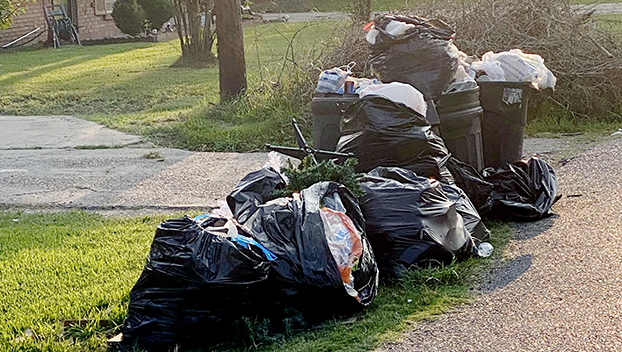 Trash on Concordia Park Drive was left at the side of the road for a couple of weeks due to labor issues and a breach in contract by Waste Pro.

A resident of Concordia Park Drive, Damus Smith, said trash has not been picked up in his neighborhood in at least two weeks. Smith said his scheduled trash day is Wednesday every week. However, last week and the week before no sanitation trucks came.

“It has just been piling up,” Smith said.

Due to labor issues within the company, Waste Pro neglected to collect trash from several residents over the span of multiple days Burley said. The issue continued to affect more areas across the parish for several weeks.

“Concordia Park is one of the lucky ones that has really only missed one week and now they are on their second,” Burley said. “We’ve had areas that haven’t been picked up for three to four weeks.”

Burley said the parish’s contract with the company stated that if they repeatedly missed garbage, Waste Pro would be fined $150 per household per day after failing to remove trash. After multiple occurrences and trash beginning to build up at residences, the fines and penalties against Waste Pro rose to alarming rates, causing the

Concordia Parish Police Jury to take action or be faced with potential health violations, she said.

“You take 4,300 residents who haven’t (had trash) picked up in one week, two weeks, three weeks and you multiply that by $150 per household per week and you get $685,000 for one week,” Burley said. “So we gave them notice we were terminating the contract for breach of contract and that the fines and penalties accumulating exceeded the contract.”

The decision to terminate the contract with Waste Pro was finalized at a special-called jury meeting on July 21. Burley said instead of taking legal action against the company, the police jury agreed to instead withhold any future payments to Waste Pro.

Burley said that they are remedying the problem that was left to them once services from Waste Pro were discontinued.

The Concordia Parish Police Jury made an inter-local agreement with the Concordia Parish Sheriff’s Office in order to use the resources available at the CPSO to begin cleaning up residential trash, which is a temporary solution until a new waste removal contract is approved.

CPSO is being compensated by billing the parish $15 per household, which is higher than the previous rate of $13.22 paid to Waste Pro.

They have installed five sets of trailers equipped with CPSO employee drivers and inmate workers on the ground working 14 hours a day to catch up with overdue waste removal.

Burley said that the parish is expecting these efforts to take 30 days before getting back to some normalcy. During that time, CPSO employees will be working to get the trash removed with trucks and trailers until better methods become available.

Concordia Parish Sheriff David Hedrick said that the Sheriff’s Office has begun taking action and asked residents to remain patient as efforts are being put in place to resolve the trash overflow.

“In the first week we have picked up over 32 tons of trash with our trailers,” Hedrick said. “We are working as hard and as fast as we can to complete this mission.”

For questions or concerns, residents should contact the Concordia Parish Police Jury at 318-336-7151 or email Info@conppj.org.