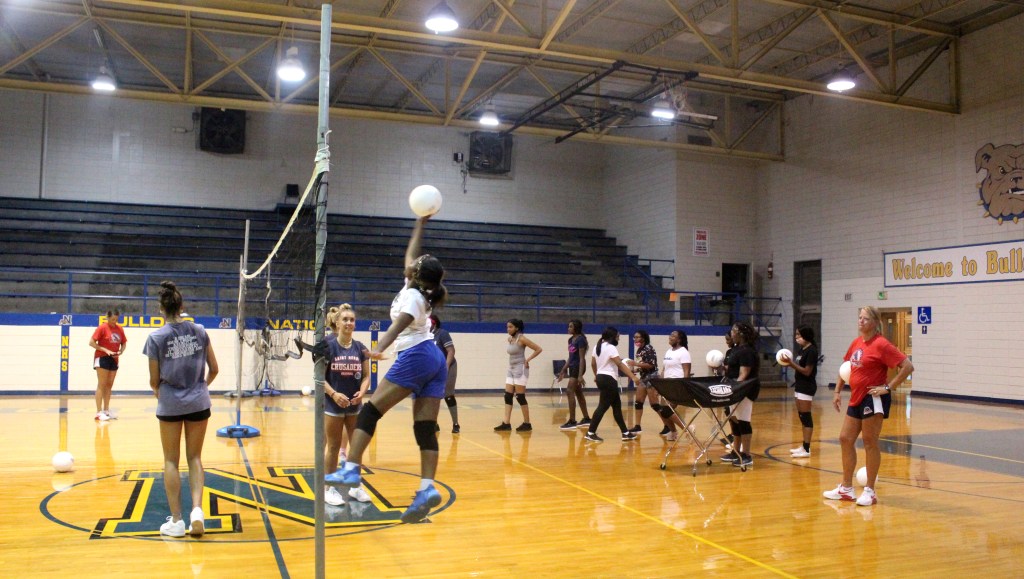 Danyell Johnson hits a ball in a drill during a volleyball clinic put on by players and coaches from St. Henry District High School in Kentucky. Magnolia Bluffs Casino owner Kevin Preston donated a clinic and gear to the volleyball team who play in their first game Tuesday night. (Hunter Cloud The Natchez Democrat)

NATCHEZ – Magnolia Bluffs Casino owner Kevin Preston donated 33 pairs of shoes, 30 volleyballs, a t-shirt and team bags to the new Natchez Volleyball team Monday afternoon. It was a day before their first volleyball match, so he donated a free volleyball clinic to get them match-ready.

His daughter and some of her volleyball teammates were flown down to Natchez to lead the volleyball clinic. They live in Northern Kentucky and play for St. Henry District High School in Erlanger, Kentucky.

St. Henry coaches Maureen Kaiser and Shawn Casey Schwarz came to Natchez to coach in the clinic. The three players are all committed to play volleyball in college.

“My daughter Taylor Preston is committed to Oklahoma University. Abby Schaefer is committed to Western Kentucky and Cora Taylor is commited to Bulter,” Preston said. “We wanted to help a school out in our community, and hopefully, the players can get scholarships.”

Natchez volleyball head coach Jamal McCullen said he was thrilled and excited to receive the help. The Bulldogs did not have the equipment needed to host a match, he said.

They had to flip their home matches with the away matches for the first couple of games. McComb will be the first team they play on Tuesday night, and due to the donation by Preston, they will be ready.

“We are blessed to have the support,” McCullen said. “We want to thank Kevin (Preston) and Tony Heidelberg for their generosity. The coaches took the lead on everything because I’m an in-class teacher. I haven’t had time to set up everything. It was a blessing.”

McCullen watched from the backline with a volleyball under his arm as his team went through a pass, set and hit drill. He said he learned better ways to run drills thanks to the St. Henry coaches.

“It is a lot of interaction. There is movement. There is a constant rotation,” McCullen said. ” We were doing a basic version of this, but now I know how to do it more efficiently.”

Natchez senior Danyell Johnson said she learned of the donation at the last practice. She is one of a few basketball players who are playing volleyball for the Bulldogs this season.

“I was excited, and I’m ready to play volleyball,” Johnson said. “It’s just something I enjoy too. It’s something I’m good at, and I enjoy it.”