Cathedral throws no-hitter by committee in win over WCCA 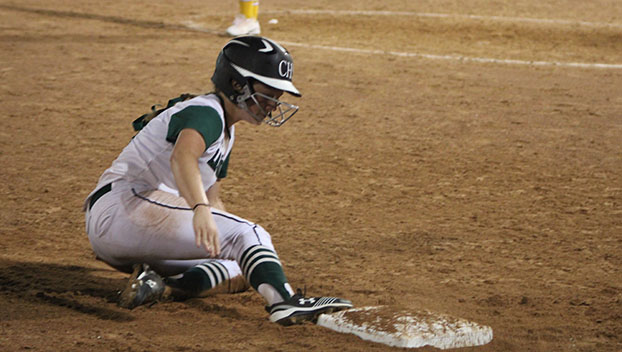 Liza Gregg had an RBI on one hit for Cathedral in the shutout win. (File Photo | The Natchez Democrat)

“We took advantage of some walks. We got hits when we got runners on base and that’s how we scored most of our nine runs,” Beesley said.

NATCHEZ — Tensas Academy had no answer for Cathedral High School’s Lily Crum on the mound and at the plate as the Lady Green Wave defeated the Lady Chiefs 15-0 in just three innings last Monday afternoon.

Crum went all three innings and threw a no-hitter. Even though she walked three batters, she struck out six batters and was aided by a defense that did not commit a single error. She helped her own cause by going 2-for-2 with three RBIs.

“Our pitchers are settling in right now. They’re throwing a lot of strikes,” Beesley said.

As a team, Cathedral had 10 base hits and the Lady Green Wave advantage of four errors. Kinslee Young went 2-for-2 with a double, Lauren Dunbar was 2-for-3 with three RBIs, and Hannah Murray was 1-for-2 with two RBIs.

“I thought we had some good at-bats,” Beesley said. “Kinslee and Lauren are really swinging the bats well right now.”