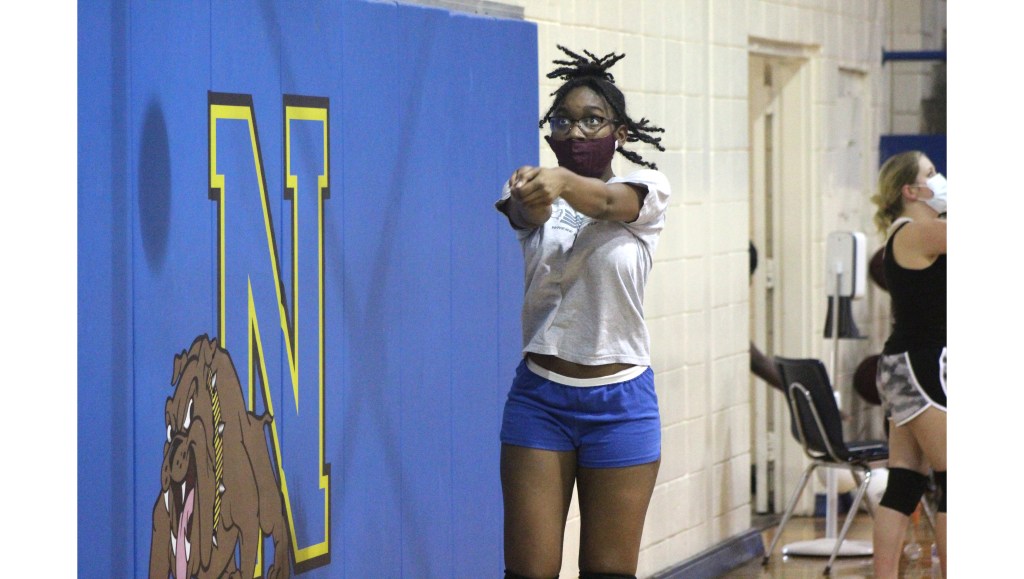 Gabrielle Champ works on passing in practice at Natchez High Wednesday. She said she was nervous and excited to play in the first volleyball game in school history. (Hunter Cloud The Natchez Democrat)

They took the court against McComb in the Natchez’s first volleyball game in school history. McComb won all three sets 25-4, 25-6 and 25-8.

Champ, a junior, said she was happy when she first heard the Bulldogs would have a volleyball team this year. Her cousin first showed her the game, and she wanted to try it out but never had the opportunity, she said.

“It was my first time playing against another team in volleyball,” Champ said. “We didn’t do that good the first set, I think we were nervous. We did the best we could. I am glad we had fun. One day if they have our pictures on the wall and a kid can look up and see it and think, ‘Wow I want to be like them when I grow up,’ it would be cool to inspire someone.”

Softball player Ava Reese, also a junior, said she had played the game since she was five. When Natchez announced it would have volleyball, she decided to step out of her comfort zone and try something new.

She said she always wanted to play volleyball, and playing in the first game was a great experience. Her only complaint is if she had a little more height.

“I’m honored to be a member of the first volleyball team,” Reese said. “It is a good opportunity. It is a great inspiration for others. This is my first time trying it. I am stepping out and trying something new, and I think that could inspire others. You never know what you could be good at.”
Basketball player Cylenthia Reed, a sophomore, figured volleyball could be something new to play. She is using the game to keep in shape during the basketball offseason.

“Instead of sitting at home. I get my blood pumping, and I build endurance,” Reed said. “I plan on playing volleyball until I graduate.”

Senior Bulldog Mercedes Sewell said she is going to make the most of this season before she graduates. She is a basketball player and is also using volleyball to stay in shape.

Kevin Preston, the owner of Magnolia Bluffs Casino, helped the team prepare for their first game by donating a volleyball clinic. Sewell said the volleyball coaches and players from St. Henry District School in Kentucky taught her the steps to hitting and spiking.