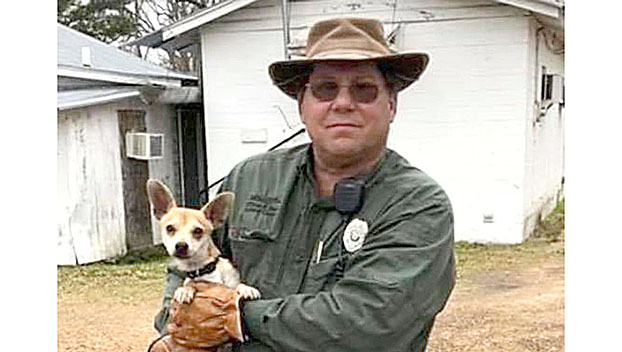 Natchez Animal Control officer Randy Myers retired June 30 after nine years in that position. Myers will continue to live and work in Adams County with his farm and leather business, he said. (Submitted photo)

Officials discussed their desire for a full-time certified police officer to fill that role during Tuesday’s regularly scheduled meeting of the Natchez Mayor and Board of Aldermen.

“A certified officer is better able to enforce the animal control ordinances than a person who is not certified. We have run into difficulty there because of staffing shortages,” Natchez Mayor Dan Gibson said.

Natchez Police Chief Joseph Daughtry, who is currently attending an officer training in Biloxi and participated in the meeting by phone, said the police department has recently filled three vacancies on the police force with at least two new hires pending.

In lieu of a full-time animal control officer and equipment for catching and moving animals, police officers have been responding to animal calls and using their “bare hands” to deal with those calls, he said.

Alderwoman Valencia Hall said, “I appreciate the officers pitching in but we need a full-time person in this position,” to which Daughtry agreed.

“When you all get calls from your constituents, and I know that you do, I don’t want you to think that your requests are not being heard,” he said. “We ask that you be patient with us. We’re going to do the best that we can with the manpower that we have. … I agree with Alderwoman Hall. That job is a full-time position.”

Alderman Billie Joe Frazier said in a city the size of Natchez, it’s going to be hard to get a certified police officer fill the position, “because most who sign on with the police department want to be a police officer and not an animal control officer, or what most people call a dog catcher.”

Gibson suggested the board reassess the situation in a couple of weeks after new police officers join the department.

“I would suggest with the good news about new hires, that would allow us to assess the situation. We should have better news to report in just a couple of weeks. It is very important that we have that full-time officer assigned to this duty as soon as possible,” Gibson said.

In other matters concerning the police department, the board voted unanimously to a $3,500 per month contract for a grant writer to aid the department in getting needed equipment.

The contract would last from September to December after it is reviewed by the city attorney, Bryan Callaway.