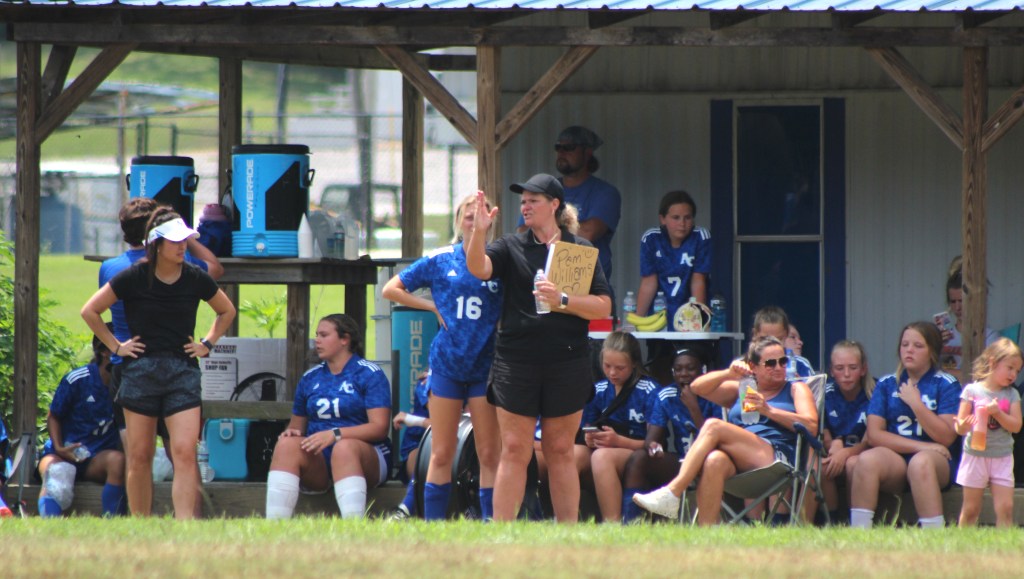 ACCS head coach Pam Weatherly-Williams, in black, said their game against Brookhaven Academy was canceled due to rain. Injuries for other teams have led to rescheduling their weekend tournament. (Hunter Cloud The Natchez Democrat)

BROOKHAVEN — Adams County Christian School’s junior varsity and varsity girls’ soccer teams arrived at Brookhaven Academy last Thursday afternoon ready to hit the pitch against the Lady Cougars in what would have been their MAIS Division II South openers.

However, Mother Nature had other ideas as inclement weather made sure those games would not take place.

“We got there. We were ready. The parents were ready. They had a little rain. Their AD (athletic director Anthony Hart) canceled the game,” Lady Rebels head coach Pam Weatherly Williams said. “We had over 40 players from the JV and varsity teams who traveled there. The girls were disappointed.”

Williams said the two schools are working to try to rescheduled the game for later in the season.

ACCS hosts its annual Shootout Tournament on Saturday that started at 8 a.m. Among the games that took place was a home Division II South game against Oak Forest Academy, which she said was scheduled for 10 a.m., but that could change.

Williams said last Friday morning that both Parklane Academy and Washington School had to drop out of the tournament because of injuries and because of that was having to redo the tournament’s schedule.

“They don’t have enough players. Starkville Academy had already dropped as well” Williams said. “Park Place (Christian School) and Heritage (Academy) are down on players, but they still plan to travel.”

Williams added that Heritage Academy was down to nine players, but still planned to make the long trip from Columbus to Natchez. She said the Lady Patriots would most likely play in a JV game.

“We still have a lot of competition. We still have several teams. We expect to have an all-day tournament,” Williams said.