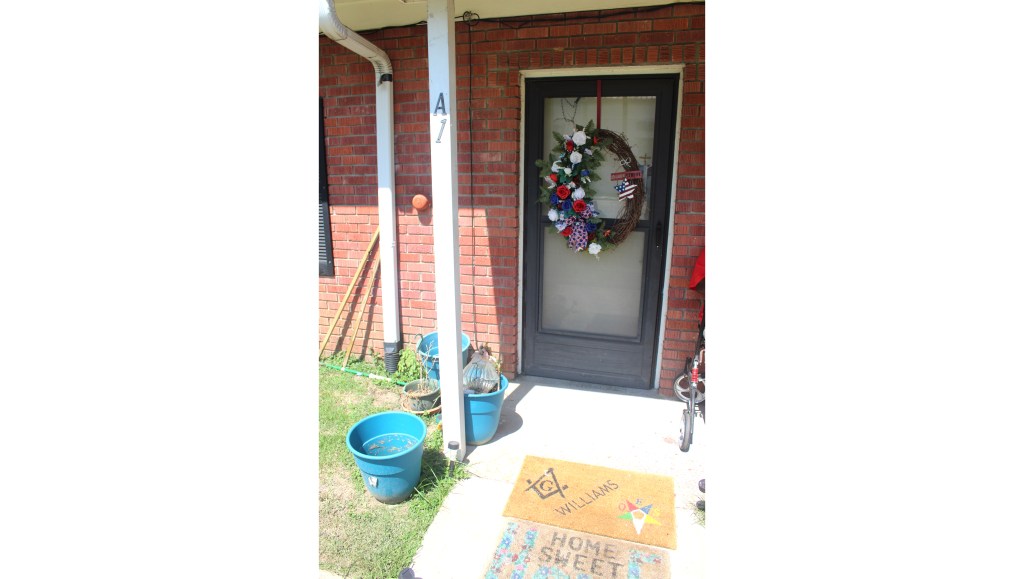 A wreath Samuel Williams' wife made hangs on the door at his apartment on Fourth Street close to where The Dart landed. A mat shows the logo of the grand masons, an organization he has been a part of since 1993. (Hunter Cloud The Natchez Democrat)

Natchez resident Samuel Williams sat outside his apartment on Fourth Street close to where The Dart landed Friday morning. He smoked a cigarette and went inside to check his bacon before lighting another one.

A native of Alexandria, Louisiana, Williams first moved to Natchez three years ago. He has relatives in both Vidalia and Natchez. They are the reason he first came to the area, he said.

“Family is important because, without them, you wouldn’t have anything,” Williams said. “That isn’t entirely true. I have some friends that are closer than family. I try to get together with my family as much as possible.”

Around his front patio are lights he placed in the ground, he said. Wreaths hang on the windows and doors adorned with red, white and blue ribbons. His wife Tawana makes wreaths and then sells them at the Farmers Market on the Natchez Bluff.

Between the sidewalk and patio, a doormat bears the emblem of the Grand Masons. He has been a member of the organization since 1993, he said.

“It is an organization that helps kids to get scholarships,” Williams said. “It also helps with giving school clothes to kids and Christmas boxes to the elderly.”

His favorite way to spend his spare time is to cook for others, he said. Cooking has been a passion of his for a long time. It is something he learned from his momma when he was a little boy.

She started teaching him how to cook by first letting him clean and watch. Now, he has grown into a cook who loves to make spaghetti and meatballs, purple hull peas and okra, and red beans and rice.

“I enjoy cooking. I enjoy watching people eating and how it brings people together,” Williams said. “If I started cooking right now. I bet you I could get a crow of people. What inspires me is waiting to see the people’s expression when they taste my food.”

Taking up a parking space in front of his apartment is a smoker. He said he wants to put a handwash station on it. After that, he hopes to get a license so he can make food to sell people.

“I can do it all when it comes to cooking,” Williams said. “It will be nice when it is cooler, and people can enjoy their barbecue. I will probably start barbecuing in October.”