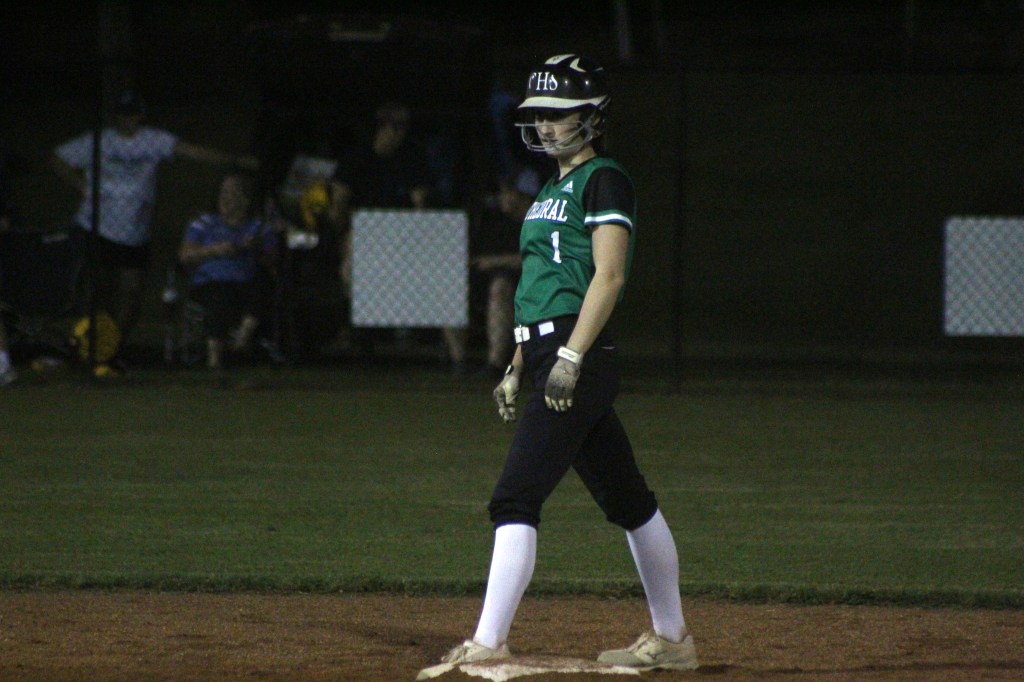 Cathedra's Marlie Harmon stands on second base after her bases clearing double into the gap. It would extend the Green Wave's lead to 7-1. They would go on to win 11-2 over Adams County Christian School Monday night. (Hunter Cloud | The Natchez Democrat)

NATCHEZ — Cathedral scored six runs in the top of the fifth inning against cross-town rival Adams County Christian School to spring the game wide open. Marlie Hargon had the biggest hit of them all as she smoked a fastball into the left-center gap.

Cathedral would hang on and win 11-2 to secure their first district win of the season. Hargon said she had not been batting well before the game. She had four hits all season, and only 8 RBIs before her three-run double scored crucial runs in a tight rivalry game.

“I was stressing out (about the game) because it was close, and then we finally picked it up,” Hargon said. “When I got that double. I was thinking ‘finally’ because I was not hitting well all season. Doing that, especially against AC, makes you feel good.”

When she got to second base, she thought someone was going to be a third. She did not expect to clear the bases with her hit. Cathedral’s fans were going crazy as she rounded first and the three runs scored.

“Everyone was going crazy,” Hargon said. “I told everyone at school to come to the game. Before that inning, we were hitting it okay. That one inning just skyrocketed. Having that double gives me a lot of confidence.”

ACCS was aggressive on the base paths early in the game and was caught trying to get an extra-base twice in the second inning. One of them was a close play at the plate when Camren Strittman collided with the catcher and was called out by the umpire.

Cathedral’s KG Fisher hit a triple with one out to get herself in scoring position in the third inning. She scored on Kinsley Young’s sacrifice fly the next play to go up 1-0 in the top of the third.

Cathedral gave up a few hits in the fourth inning to allow AC to get base runners. Kate Parsons was thrown out at third, but Paris Harveston got to second base.

AC tied the game with a single by Laiken Davis to right field in the bottom of the fourth inning.

ACCS was not out of the fight yet. Harveston singled to start the bottom of the seventh inning. Davis reached first base on a walk. Harveston reached third base on a passed ball. Brooke Collier doubled down the left-field line scored her. Lilly Crum retired the side to win 11-2.

This game was the best game the Rebels have played all year, head coach Tate Lipscomb told his team after the game. He had remarked to an assistant coach that they could not catch a break after a line-drive hit right at the pitcher was caught for an out. If it had snuck through into the outfield, it might have scored some more runs.

Offensively, Harveston shone at the plate. She was three for three. Brooke Collier was right behind her with two hits. Harveston said she worked on batting after school before the game.

“I hit 140 balls after school,” Harveston said. “(I was not tired) I just tried to push through. My mindset at the plate is I’m going to hit the ball no matter what.”

A change in attitude was something Lipscomb had said his team needed after a loss to Franklin Academy. They have shown growth by improving their attitudes and in hitting, she said.

They have had a slower start to the season. ACCS lost eight of their first nine games, but she said the team has been getting better as the season goes on.

“You learn you have to get better throughout the season,” Harveston said. “We can do that by going to the plate and knowing we are going to hit the ball no matter what. We will play Cathedral again, so there will be a comeback.” 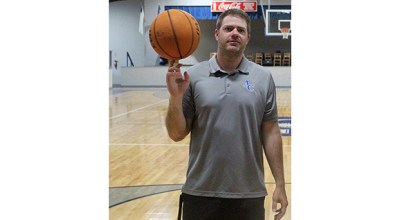