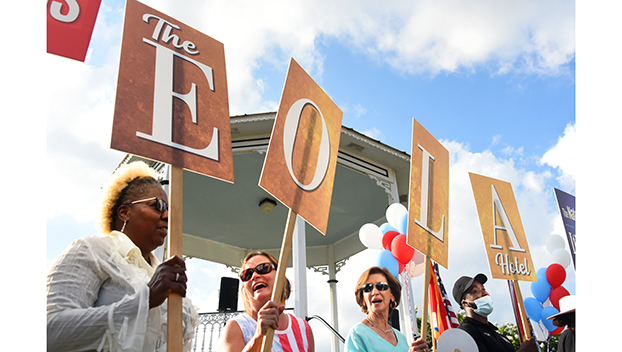 Signs spell out "Eola" to hint at a new developer for the historic Eola Hotel during Natchez Mayor Dan Gibson's state of the city address. (File photo | The Natchez Democrat)

NATCHEZ — Natchez Inc. plans an economic development announcement on Thursday at 10 a.m. in a parking lot across the street from the former Eola Hotel.

Chander Russ, executive director of Natchez Inc., would not discuss what the announcement involves, but the inclusion of a photo of the former Eola Hotel’s courtyard leads one to assume the event will involve news about the hotel.

Natchez Mayor Dan Gibson hinted during this state of the city address in late July a deal was near that could reopen the Eola.

“The ink is dry,” Gibson said of the hotel at the finale of his speech. “Details will be announced very soon.”

All Russ would say about Thursday’s announcement is “It’s something to get excited about.”

The Eola Hotel was built in 1927 and added to the National Register of Historic Places in 1979.

The hotel reached its height of popularity the early 1930s, when Natchez started the pilgrimage tours of antebellum homes, and ceased operations in 2014.

Current owner Robert Lubin, a Virginia attorney, began the first phases of renovating the building to reopen it as a hotel once more before the COVID-19 pandemic hit.