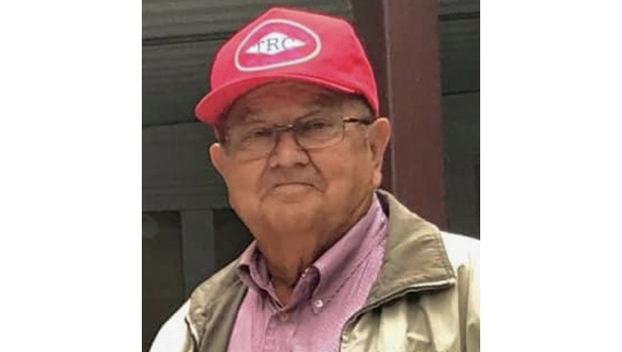 Jesse Walter “J.W.” Calhoun slipped the surly bonds of earth and touched the face of God. Graveside services were held on Friday, August 13, at 11 a.m. in the Calhoun Bend Family Cemetery under the direction of Hixson Brothers Funeral Home with Pastor John Rushing officiating.

J.W. was born in Mayna, Louisiana, at his maternal grandparents, Walter and Minerva Trisler’s home, on March 1, 1934 to Rodney Lavere (B.B.) and Maude Virginia (Betsy) Trisler Calhoun.  He was a 1952 graduate of Monterey High School and attended LSU in Petroleum Engineering until he followed his dream and returned to Calhoun Bend to become a fifth-generation farmer, on this land.  He was married in May, 1955 to, Bobbie Bass Calhoun.  With a crop in the field in 1956, he was drafted to serve in the military.  Receiving a deferment until he could harvest, he was inducted in January, 1957, in the United States Army.  After training, he was assigned to duty in Rapid City, South Dakota and was stationed on Ellsworth Air Force Base in an anti-aircraft unit, the 531st AAA Battalion, which was being converted to guided missiles, which was the first in the nation, at the time.  Ellsworth was a Strategic Air Command (SAC) base, providing important missile defense of the United States.   He served in operations and intelligence.  During this time, J.W.  began a life-long passion of documenting his life and the lives of his family and friends with home movies.  One of his favorite subjects was filming his farming operation.  He has movies of the crops, equipment, and methods used in agriculture from the 50’s until modern times.  During these years, he was a member of the Louisiana Farm Bureau Federation, the Louisiana Soybean Association, and was a life time member of the National Rifle Association.  He was a member of First Baptist Church in Monterey.  In 1966, he was elected to the Concordia Parish School Board and served for twenty-eight years, where he helped guide the system through growth and the tumultuous years of integration.  He served many terms as the President of that body.

During all the many years of his farming, he documented the weather each day.  He could tell you how many inches of rain fell on which piece of property, the temperature, the weather conditions, or any important event by looking at one of his many calendars.  J.W. prided himself on the precision and appearance of his land.  He employed many young men on his farm and he tried to impart his knowledge and share his wisdom of farming to them.  He wanted straight rows, precise drainage, and clean turning rows.  Farming was not only his livelihood, but one of his only hobbies.  J.W. tackled each job “with the fervor of a rookie ball player,” as quoted many years ago in a newspaper article.  One may not have agreed with or even wanted his opinion, but it was going to be given.  There was the right way, the wrong way, or the “J.W. way” to doing things.  As a young man, he practiced and loved pitching and he and his teammates would pitch and catch during school recess.  He was scouted by a Yankee scout, but was told he was too small to play major league baseball, but that didn’t dampen his enthusiasm or love of the game.  Many Sunday afternoons were spent in Island Bayou playing with family and friends.  J.W. accepted the Lord Jesus Christ when he was in the Eighth grade and was in Mrs. Ola White’s Sunday School class at Mayna Church of God.  He was a student of the Bible and loved his Sunday School classes.  J.W. loved his family and enjoyed learning and studying the history and the genealogy of the Calhoun family.  He had listened to older family members, all of his life, and he loved to recount the stories of his youth.  In latter years, much effort was put into documenting his version of the oral history of Calhoun Bend and his forefathers and he was adamant that the Calhoun Family have a cemetery.  To that end, he donated the property so family members could be buried and stay at home.  He felt it was important for the younger generation to understand what had been sacrificed and worked for, by the older generation, to pass on to the future generations.

In lieu of flowers, please feel free to donate to the charity of one’s choice or Christians Sharing Christ Film Ministry, P O Box 508, Libuse, LA 71348, which can be found at www.cscfm.org.