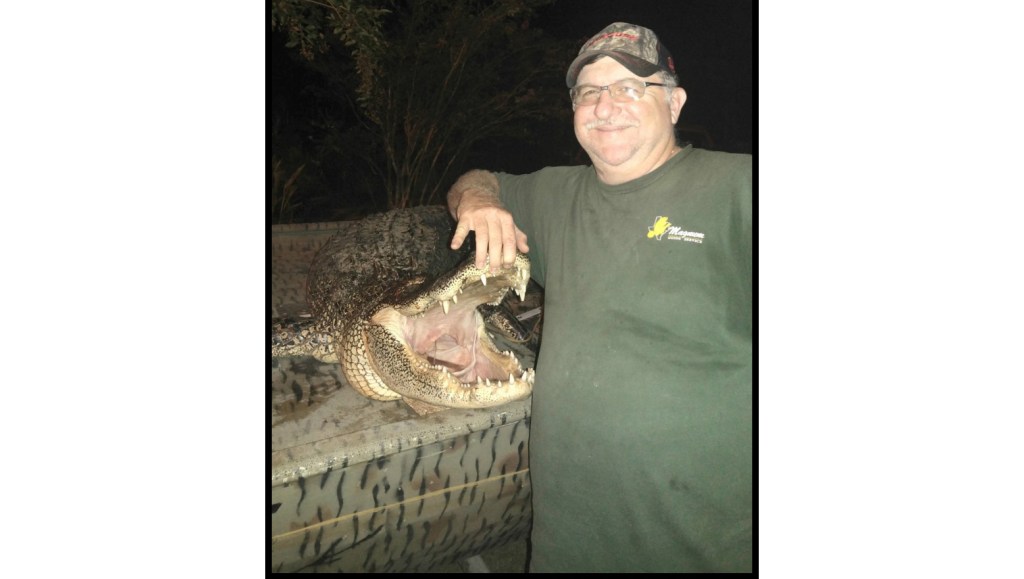 CROSBY — Hunter and fisherman Thomas Arnold killed his first turkey when he was seven years old. Recently he turned 63 and estimated he had killed 200 turkeys in his lifetime.

He is a member of a wounded deer tracking group called Team Break Down. He uses his blood and redbone mix hound to help other hunters find deer they have wounded. This August, he is looking forward to hunting alligators. He got into it about five years ago.

“I hunted and fished just about everything but alligator,” Arnold said. “I got interested in Mississippi’s alligator draw, and I got drawn for the first time in 2017. I didn’t know a whole lot about it. A friend of mine (Jeff Nunnery) had been there a time or two, so he went with me.”

In Mississippi, hunters have to be drawn in an online drawing to hunt alligators. They can kill one alligator over seven feet long and one under seven feet long. Hunters estimate how long an alligator will be by looking at the length from the alligator’s eyes to its nose, he said. Each inch equates to a foot in length.

The head of an alligator he killed in 2017 during the Mississippi alligator hunting season sits on his kitchen table. The gator was 10 feet and eight inches in length. His friend Nunnery and Scott Landrum were with him on that trip.

“We made two casts and missed him, and he went down,” Arnold said. “ When he came back up, I made a long cast over him and hooked him. He rolled, rolled and rolled and then dropped straight to the bottom. He was trying to walk into the Mississippi River from the Buffalo River. I think by the time we got him in the boat, he had gone one mile.”

Using  No. 10 weighted treble hooks, Arnold and his buddy Jeff Nunnery had hooked him in the tail and back leg. They kept the gator from coming up to the surface, and it drowned, he said.

Typically, they have to use a noose to keep the head from moving before shooting it in the top of the head where a quarter-sized soft spot is. He said they use a .410 shotgun. After dispatching the gator, they have to tape its mouth shut.

“We have learned some lessons. (For example) they see a lot better than you at night,” Arnold said. “We try not to put ourselves in bad situations. We talk about safety before we start hunting.”

One of those lessons came from not putting a noose around the gator’s head, he said. His friend Bo Brown tried to remove a hook from one gator to release it into the river when it turned and snapped at his hand. A pair of gator teeth were stuck in the boat’s fiberglass side, he said.

Another time, an alligator drugged them out into the Mississippi River where they had to fight the current.

“We almost sank the boat,” he said.

Alligator hunting is a team effort, he said. He usually goes with three other people, his friends Nunnery, Brown and Landrum.

They share a bond like a brotherhood in the outdoors. They fish, track deer and hunt together, he said. The camaraderie they share on trips  is what he enjoys most about alligator hunting, he said.

In five years, he has been drawn three times to hunt alligators. This year, he said he believes there were about 11,000 people who entered, and 962 tags were issued. He said he was lucky to be drawn that often.

“The first alligator was tough, and the mosquitoes were tough,” Arnold said. “I would hunt every year if they let you do it. Just standing at the boat ramp on the Buffalo River, I could see about 10 gators.”

He looked at the taxidermied alligator head on his kitchen table.

“There is no telling how many wild hogs, deer and coons this alligator has eaten in his lifetime,” he said.

Big alligators are not the best for eating, he said. Their meat has too much fat, but an alligator under seven feet long is the best to eat. Alligators have meat along their side that is like deer tenderloin, he said. This meat is what people like to fry.

Underneath the gator’s jaw are two balls of meat. These are dark red meat and look almost like a ribeye, he said. This meat can be used to make sauce piquant.

Over time, he has learned tricks to cleaning alligators. Using an air compressor, he sticks the needle under one of the legs, so the air pops the skin loose from the meat.

He is now nine days away from the beginning of a new season. The excitement is building for the first night of the season. Typically, he tries to get all of his alligators on the first night, he said.

“It is a blast. You can shine your light, and their eyes are red like Christmas lights,” Arnold said. “The first day of alligator season, we go at dark so you can see their eyes good.”