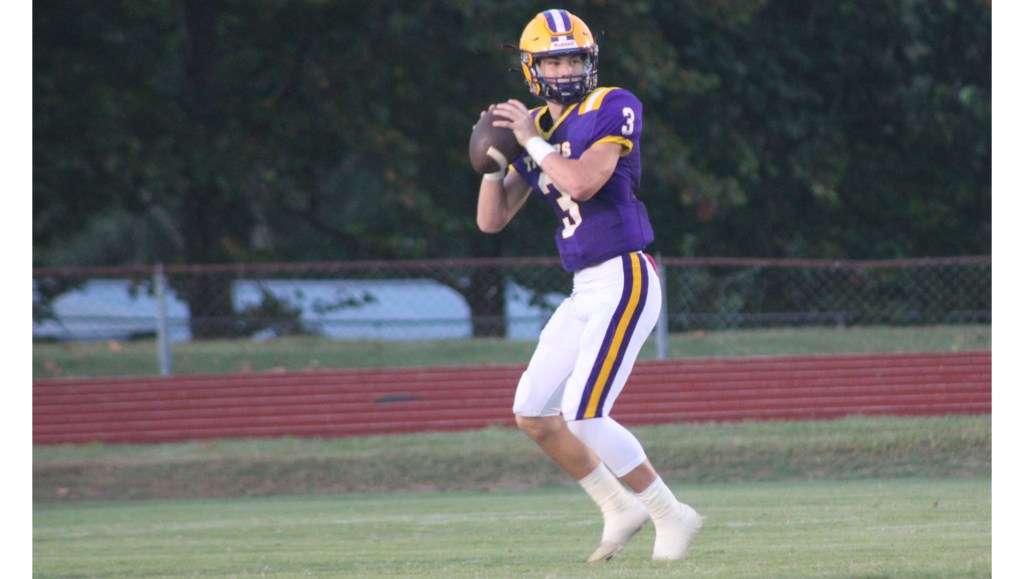 Centreville Academy's Peyton Jones looks for an open wide receiver in a game against the Washington School Generals in August. (File Photo The Natchez Democrat)

CENTREVILLE — While the majority of the area teams in the Midsouth Association of Independent Schools start their 2021 regular season Friday night, Centreville Academy began their season last Friday night.

And the Tigers came away with a 52-34 victory at home over the New Orleans Home School Saints. Now they look to improve to 2-0 when they play host to the Bowling Green School Buccaneers Friday at 7 p.m.

As for the win over New Orleans Home School, Centreville head coach Bill Hurst said there were some things he and assistant coach Brian Stutzman were pleased with and some areas that need to improve on during practice this week.

“I was pleased with the defense against the run and running the ball. We got a better effort out of the defensive line. Pass defense was the weak link. Defensive backs did not to a very good job. Offensive line and their blocking assignments definitely need to be improved,” Hurst said.

One player on offense who stood out for the Tigers last Friday night was senior running back Ben McGregor, who had 112 yards and three touchdowns — a 15-yard run in the first quarter and 49- and 48-yard runs in the second quarter. Eighth-grade running back Garret Jeansonne had 16 carries for 87 yards and one touchdown run as well as two fumbles.

Another eighth-grader, wide receiver/defensive end John Austin Sterling, showed off his speed in returning a kickoff 70 yards for a touchdown in the third quarter after a Saints touchdown that gave the Tigers a commanding 52-20 lead.

While Hurst said he was pleased with the run defense and not so much the pass defense, he could not be pleased that four of the five touchdowns that New Orleans Home School scored were on the ground. Yet he had to be thrilled that Tigers’ defense forced four turnovers — two fumble recoveries and two interceptions.

“It was better and a real good practice. Much more energy and effort,” Hurst said. He looked for that kind of enthusiasm and effort to continue on Wednesday and Thursday in preparation for a Bowling Green team that went 5-4 last year and made the MAIS Class 4A Playoffs.

Hurst added the offensive line and defensive backs need to step up if the Tigers are to defeat the Buccaneers.

“They are more explosive. They’re going to give us more different looks. They’re going to show more blitzes,” Hurst said. “Number 6 (senior wide receiver/defensive back Nathan Jenkins) is one of their main guys. Number 7 (sophomore quarterback Cole Farris) is another.”

When the two teams played each other in Week 2 on Aug. 28, 2020 at Bowling Green in Franklinton, La., Centreville held on for a 38-28 win over the Buccaneers.