Plan under way to reopen Eola Hotel; Dickie Brennan and Co. will be in charge of food and beverage 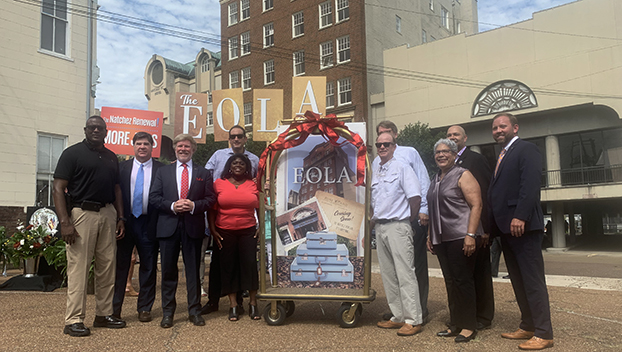 NATCHEZ — The Eola Hotel will reopen as a hotel, City of Natchez officials said during a press conference this morning.

Groundbreaking for renovations are expected to begin in the first quarter of 2022, Natchez Mayor Dan Gibson said.

Hayes Dent, President of Public Strategies of Jackson and representative of the development group called Endeavor, said he has been working in partnership with Kevin Preston of the Magnolia Bluffs Casino to make the project possible, as well as Dickie Brennan of New Orleans, who is expected to be in charge of food and beverage operations at the new Eola Hotel.

Dent said the hotel would be affiliated with a major chain, but did not name the hotel chain.

A major factor in the project moving forward, Dent said, was the donation of the Fry Building by Natchez resident Walter Davis and the Fry family to the City of Natchez. Natchez officials  plan to turn the Fry Building into a parking garage. Gibson said the project would not have happened without a plan for additional parking.

This story is developing and will be updated as more information is available.