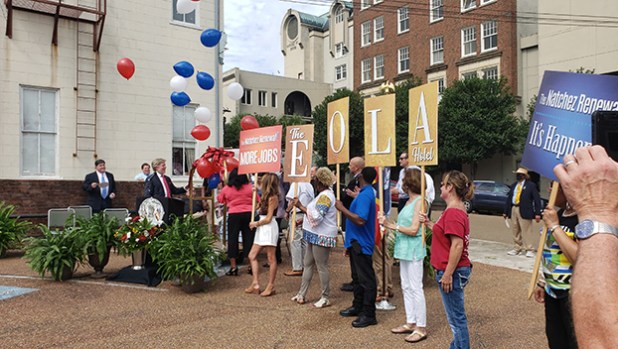 Officials release balloons from a luggage cart original to the Eola on Thursday. (Sabrina Robertson | The Natchez Democrat) 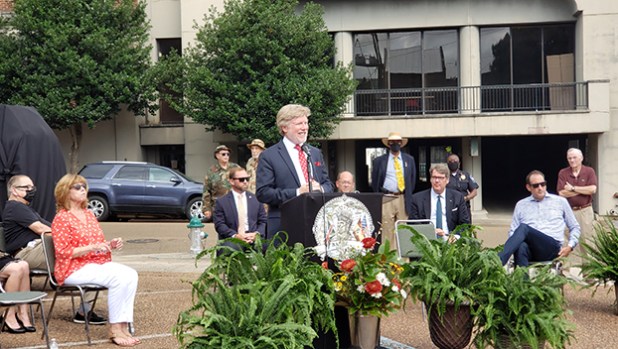 Natchez Mayor Dan Gibson speaks to attendees at an anouncement about the renovation of the Eola on Thursday morning. (Sabrina Robertson | The Natchez Democrat) 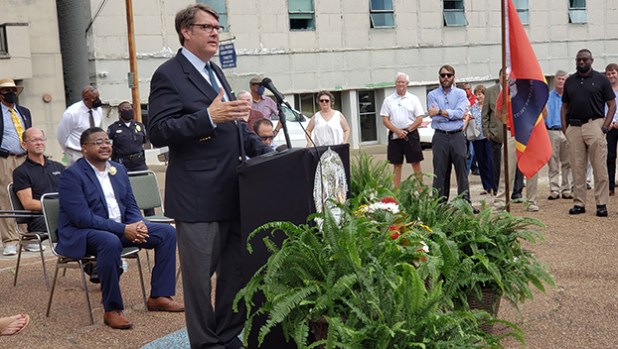 Hayes Dent, president of Public Strategies and an affiliate of the Endeavour Corp. development group behind the Eola project, speaks to attendees about the renovation of the Eola on Thursday morning. (Sabrina Robertson | The Natchez Democrat) 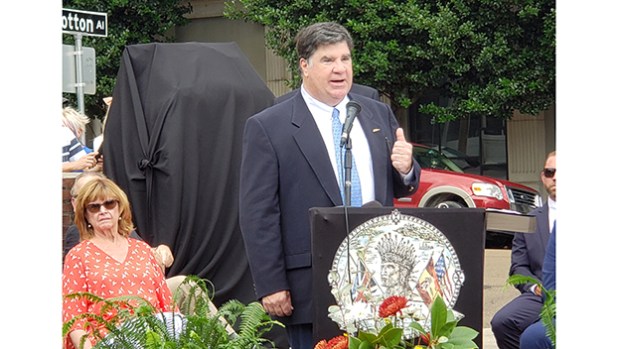 Dickie Brennan, New Orleans chef, speaks to attendees at an anouncement about the renovation of the Eola on Thursday morning. (Sabrina Robertson | The Natchez Democrat) 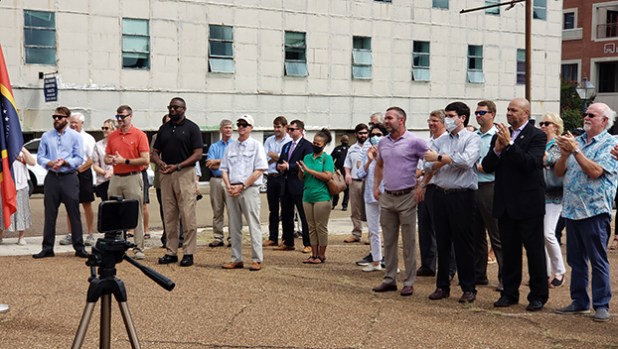 A crowd gathers to listen to an anouncement about the renovation of the Eola on Thursday morning. (Sabrina Robertson | The Natchez Democrat)

NATCHEZ — Thursday morning, Natchez officials announced what they have been hinting at since before Natchez Mayor Dan Gibson’s State of the City address in July — a project to revive the Eola is under way.

The project has been labeled Project Phoenix, which is symbolic of the once popular luxury hotel “rising from the ashes,” Gibson said during a Thursday morning press conference.

“Behind me, this great landmark dating back to 1927, has for so many years been the centerpiece of our great downtown and for the last several years been a sad, vacant reminder of better days gone by. Some have called it … a cancer on our downtown. Well today is a new day. We announce that the Eola is rising again.”

Groundbreaking for the renovation is expected to take place in the first quarter of 2022, Gibson said. He introduced Hayes Dent, president of Public Strategies and an affiliate of the Endeavour Corp. development group behind the Eola project.

Virginia Attorney Robert Lubin, who purchased the property in 2014, retains partial ownership with Endeavour and other development partners.

Dent said he and Randy Roth, owner of Endeavour Corp., have been working with a major hotel chain to make the project possible, but did not name the hotel chain.

The group has also partnered with Kevin Preston of the Magnolia Bluffs Casino & Hotel and Dickie Brennan, the owner of the award-winning Dickie Brennan’s Steakhouse in New Orleans, who will also be in charge of food and beverage operations at the new Eola Hotel.

Architect John Stewart is overseeing the design for the new hotel, Dent said.

Another major factor in the project moving forward, Dent said, was the donation of the Fry Building by Natchez resident Walter Davis and the Fry family to the City of Natchez.

Gibson said the project would not have happened without a plan for additional parking, and so their plan is to turn the Fry Building into a parking garage.

“This project, for me, began about 16 months ago before Dan announced he was running for mayor,” Dent said. “This has been in the works for a long time.”

Dent said he remembers his first look around the Eola on a business trip in the early 1990’s. He said the hotel was “sort of tired then” but remembered thinking “what a fantastic place.”

The Eola Hotel was built in 1927 and added to the National Register of Historic Places in 1979. The hotel reached its height of popularity the early 1930s, when Natchez started the pilgrimage tours of antebellum homes, and ceased to operate as a hotel in 2014.

Approximately 100 people, including media, Natchez business owners, officials and citizens who attended the announcement Thursday, applauded at the news that the hotel could one-day be operational again.

However, the Eola was not the only announcement at Thursday’s gathering.

Gibson said he would be meeting with Gov. Tate Reeves and representatives of Velocys in Jackson later Thursday to discuss the company’s planned $1 billion investment in Natchez.

“We will be discussing with Velocys what may well be the largest deal in our history and the largest money investment in the State of Mississippi between now and the year 2023 and 2024,” he said. “We’re talking over a billion dollars folks. … God is truly favoring our city. Today is indeed a time to celebrate.”

Additionally, Gibson boasted that the city has reached record numbers in sales tax revenue for four months straight. The city collected approximately $500,000 each month since April.

“In the midst of a national pandemic, when so many said that Natchez would not be rising again, we have been continually proving them all wrong,” Gibson said. “I call it Natchez strong. I call it the Natchez spirit. … Our best days are yet upon us and better days lie ahead.”