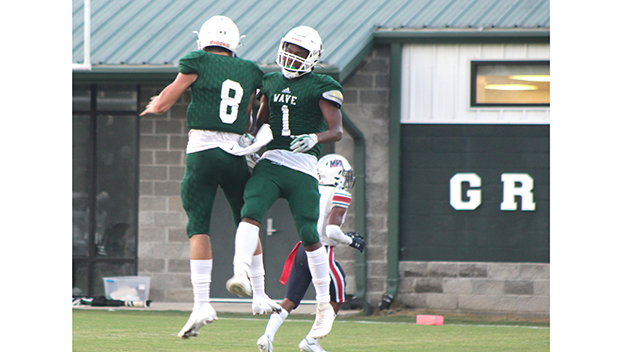 NATCHEZ — Cathedral gave itself a chance when they scored on a 56-yard touchdown pass to cut Madison-Ridgeland Academy’s first quarter lead in half. The Patriots then scored 42 unanswered points to win 56-7 in the Green Wave’s season opener.

That touchdown pass by Noah Russ to Christian Wright could have been a momentum changer, Wright said. Russ stepped back in the pocket and found Wright wide open, who caught the ball and took it down the sideline. Wright said he ran a fade route.

“I slowly played it and when I saw the opportunity, I knew it was over,” he said. “I knew it was a touchdown. It was a perfect throw by my quarterback. I felt like it was a momentum switch and we were going to come back.”

Wright jumped up into the air to chest bump Russ after the score. Cathedral was unable to stop MRA from driving the field on the ensuing drive and from there the Patriots kept scoring. Green Wave head coach Chuck Darbonne said the patriots were able to convert some big third downs and make some big plays, which was the difference in the game.

Earlier in the game, Cathedral had an opportunity to take the lead when Jordan Henry was wide open inside the 10-yard line, but an errant throw fell just beyond his outstretched arms. MRA answered with a 77-yard touchdown pass to take the lead 7-0.

“We missed a couple of opportunities which could have kept the score closer,” Darbonne said. “We had a wide open guy and I think he stumbled right before he could have caught it. It would have been a momentum changer.”

From the start of the game, the Green Wave were aggressive in their play calling. Darbonne made the decision to go for it on fourth down at midfield on several occasions. He said they will need to “find that toughness at some point in the season,” to get those short yards.

MRA’s defense frustrated the Green Wave by putting pressure on Noah Russ, so he did not have enough time to get the ball out to his receivers. Wright said he believes when his team gets more in shape, they could have a “good season just like last year.”

After the game, Darbonne told his players that MRA was the highest caliber they will play all season. Overall, he said he was proud of the effort his team gave in the game. He told his team Monday was the first time MRA went into practice after losing a game in a year or two.

“(MRA) bounced back from their loss last week. I hope we can refocus and bounce back too,” Darbonne said. “We had some moments where we showed we could be a great team. I thought we played extremely hard.”