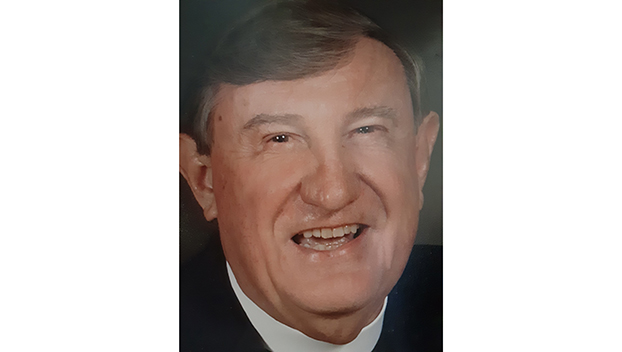 Sam was a retired Episcopal Priest who during sixty years of ordained ministry served churches from Corinth in the North to Natchez in the South. He joyfully returned to Natchez in 1998 to begin his retirement years and to serve part time as Assisting Priest at Trinity and as a Supply Priest at the former Church of the Good Shepherd, Vidalia. He loved those years in Natchez where he and wife Susanne lived in the “Mary Postlewaite House” on Homochitto. Sam remembered Mary from his childhood so there was a special bond.

Sam reflected with especially poignant memories on his time as Rector of Grace Church, Canton, during some of the most turbulent Civil Rights years. Throughout his life, he worked for racial reconciliation.  In later life, Sam loved being Vicar of St. James, Port Gibson.

Sam grew up in Jackson, graduating in 1954 from Central High School. He went on to Millsaps, which he loved, majoring in history. Bishop Duncan Gray (the first of our three Bishops Gray) felt that Sam needed some sophistication, so he sent him to the General Theological Seminary in New York City –a true culture shock for Sam. He thrived and returned to Mississippi in 1961 with his M.Div. degree to begin his ministry.

Through the many years, Sam served his church with devotion, including terms on the Diocesan Executive Council and as Spiritual Director for the Episcopal Cursillo. He also was on the Board of the Mississippi Food Network and active in local service organizations. He was active in and supported many organizations in Natchez including a time as program chair of the Natchez Historical Society. He will be most remembered, though, for his big smile and the loving spirit he brought to the pastoral care he offered his parishioners.

Sam and Susanne moved to St. Catherine’s Village retirement community in Madison seven years ago, but Sam retained his strong Natchez ties. He was proud of his family heritage – his grandfather was an early Gulfport settler, and his mother was a fifth generation Natchezian. He took joy in donating to the Mississippi Department of History and Archives the only known surviving copy of the 1817 Rules of Order for the Mississippi Territorial Legislature, a pamphlet found among family papers.

Sam was predeceased by his parents, Sam A. Tomlinson, Jr. and Jane Stewart Tomlinson and his sister, Ruth Tomlinson Lewis. Survivors include his wife of 32 years, Susanne, his sons William (Pauline), Chattanooga, TN, and Andrew (Jennifer), Clinton, his beloved grandchildren Anna and Joshua, his brothers-in-law Rev. Don Lewis and Robert H. Smith, and other much loved extended family members.     Due to covid concerns, Sam’s life and ministry will be celebrated by the family at a small requiem service, followed by a private burial in the family plot in the Natchez City Cemetery.

Memorials, if desired, may be made to Natchez Stewpot, PO Box 298, Natchez, MS 39121, the Natchez Adams Humane Society, the Mississippi Food Network, or a charity of choice.