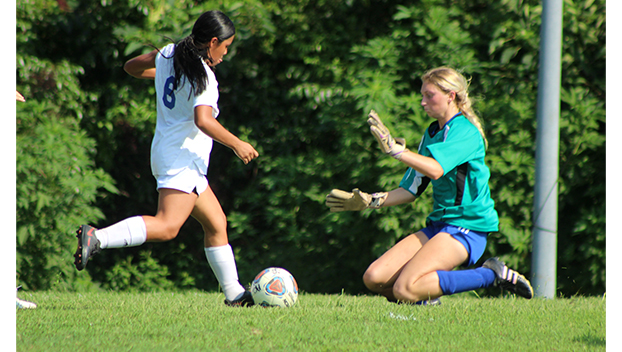 Senior goalkeeper Sarah Gordon dives at the feet of an attacker as she makes a save for the Rebels. She had 12 saves in their 3-2 win over Brookhaven Academy Monday afternoon. (Hunter Cloud | The Natchez Democrat)

NATCHEZ — Adams County Christian School wasted no time scoring the first goal of their game against Brookhaven Academy. The Rebels also scored the last goal as they won 3-2 Monday afternoon.

The Rebels started the game with quick tempo passing. They created an early goal-scoring opportunity when a shot caused a handball in the box by a Cougar defender gave AC a chance from the penalty spot.

Rebel senior Brooklyn Timmons scored the first goal of the game after BA saved her penalty kick. She put away the rebound to give the Rebels the lead.

“I was nervous, and I was tired,” Timmons said. “I didn’t know that once (the goalkeeper) touches the ball that I could shoot again. I wanted to score so bad my adrenaline was pumping.”

20 minutes later, BA equalized to make it a 1-1 game courtesy of Mallory Martin. She got a chance on a breakaway opportunity, and when goalkeeper Sarah Gordon made a save on her shot, she pounced on the rebound.

Gordon made several stand-up saves for the Rebels. She did not know she was starting Monday until warmups when head coach Pam Weatherly-Williams pulled her to the side. She made 11 saves in the game, her first as a goalkeeper in two years.

“Pam told me to go to goal, and I knew it was a district game,” Gordon said. “I was tired of losing, so I played my heart out.”

Brookhaven Academy took the lead 2-1 on a goal from Anna Caroline Adams. Gordon made the initial save, but no one could get back to defend. At the second-half water break, ACCS coach Jimmy Allgood pumped up his team.

ACCS did just that by going out and creating scoring opportunities. In the dying moments of the second half, Maddie Campbell took a free-kick to set up a teammate.

Brookhaven Academy cleared their lines initially, but Campbell made another cross, which found the foot of Madi Cooley. She slotted the ball home and ran to the midway line to celebrate as the final whistle blew. ACCS and BA went to overtime tied 2-2, and it would take two more halves to determine a winner.

Campbell set up the go-ahead goal when she delivered a perfect cross to Timmons, who tapped it home.

“I was just standing there waiting for the ball to bounce off someone,” Timmons said. “It is exciting, especially since we went into overtime, you want to score so bad. When the ball gets to your feet, you shoot it.”

ACCS still had work to do as Brookhaven Academy created another goal-scoring chance, but Gordon made a big save to deny the goal. It was one of many chances where Gordon had to come off her line and dive at the feet of an attacker.

After the game, ACCS celebrated their first win this season in their locker room. Timmons said getting the win in overtime was exciting.

“I think we worked for it, and we deserved it,” Timmons said. “I wasn’t expecting that. My adrenaline was pumping.”