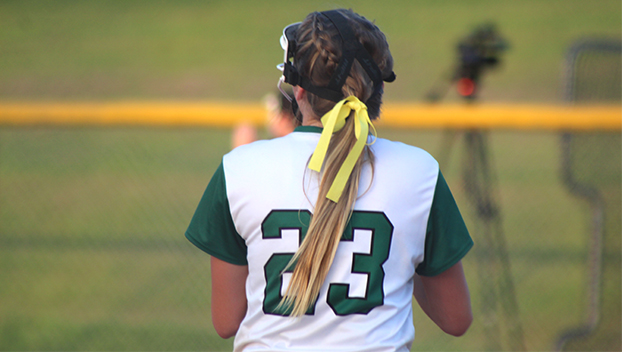 Kinslee Young stands at third base with a yellow ribbon in her hair. Cathedral's softball team wore yellow ribbons in honor of Delta Charter softball player Lily McCarthy who died last week after she was in a car accident. (Hunter Cloud The Natchez Democrat)

NATCHEZ — Cathedral jumped out to a 2-1 lead over St. Joesph Madison and tacked on six more runs in an 8-1 win Monday night. Lauren Dunbar had a two-run home run and another hit to drive in two runs.

Olivia Navarro had two RBIs for the Green Wave on a single in the bottom of the fourth. Lily Crum pitched two innings, and Marlie Hargon pitched five innings. Crum struck out four batters, and Hargon struck out six. Head coach Craig Beesley said it is nice to have multiple pitchers.

“I thought Marlie came in and gave us five quality innings,” Beesley said. “It’s good to have two pitchers who can come out and give us quality innings. It makes us feel comfortable.”

The Green Wave had a total of seven hits and committed one error in the game. Postgame, Beesley gave an impassioned speech to his players.

He said they played an “emotionally uninspired game,” and he was not happy with the way they played despite winning the game. Players went through the motions. As a team, they did not control the pace of play, he said. His critic comes ahead of their district game with Copiah Academy Tuesday night.

“We have a big game with Copiah because whoever wins will be in the driver’s seat for district,” Beesley said. “We are going to have to play the best we can play. Hopefully, we can pull it out at the end.”

Players on Cathedral wore yellow ribbons in their hair in honor of Delta Charter softball player Lily McCarthy. She died after being in a car accident, Dunbar said.

Senior Cate Drane said she was acquainted with Lily. She said she knew several of her teammates and classmates who did know Lily.

“It seemed unreal when it happened,” Drane said. “We played in her honor tonight. We wore yellow ribbons because her favorite color was yellow. She was always using the yellow heart emoji.”

Drane’s teammate Hannah Murray wanted the team to wear the ribbons in honor of Lily. She said most of the teammates had played softball with her, and they grew closer together as they grew older.

“She was just a really happy person. She always lit up the room when she walked in,” Murray said. “This past week has been emotional. She was always someone who would run up to you and hug you.”