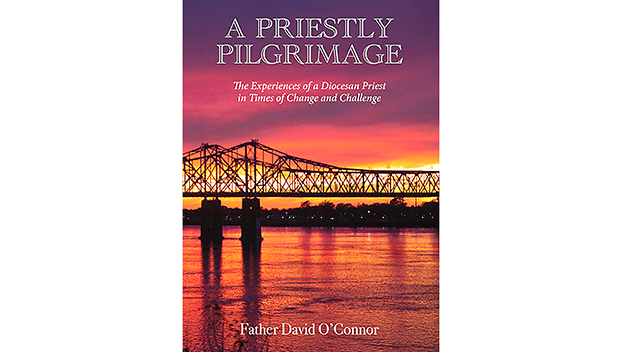 NATCHEZ — Long-time Natchez priest, Father David O’Connor, who led St. Mary Basilica in Natchez for more than 20 years — from 1986-1992 and 2003-2019 — has written an autobiography of sorts about his years in the priesthood.

His book, “A Priestly Pilgrimage,” describes his journey through an evolving theology and world.

O’Connor, a native of Limerick, Ireland, began his priesthood when he volunteered to come to Mississippi during a time of racial turmoil — the summer of 1964. He served in Meridian from 1964-67.

Not only did he arrive in Meridian during Freedom Summer, the Catholic Church was in the midst of the Second Council of the Vatican, which sought to make the church more relatable to followers.

About 1,000 Black and white college students came to Mississippi that summer to encourage voter registration among Blacks. James Chaney, a native of Meridian and a civil rights worker, and fellow Freedom Riders Andrew Goodman and Michael Schwerner, were killed by Ku Klux Klan members in Neshoba County on June 21, 1964. Their bodies were found in an earthen dam on Aug. 4 of that year in Philadelphia, Mississippi, after one of the Klansmen who participated in the murder accepted money and an immunity deal to tip federal investigators about where they could find the bodies.

The deaths would change the course of the civil rights movement in this country.

O’Connor said it was upon his arrival in Meridian that he met the first Black person of his life.

“I had never met a Black man or woman. I probably never spoke to a protestant or non-Catholic person until I came to Mississippi,” O’Connor said.

He was trained pre-Vatican II in the “old school” Catholic Church, he said. “I did most of my exams in Latin and my orals in Latin.”

The Second Council of the Vatican made huge changes in the Catholic Church. No longer did Catholics have to stay away from eating meat on Fridays during normal times. Latin was no longer the official language of mass. Lay people, including women, could be readers during mass. Girls could be mass servers.

“It was fairly revolutionary,” he said.

“The civil rights movement, Vatican II and the integration of schools, as well as the child sexual abuse by church leaders — these are four major movements that impacted my life as a priest. It’s been such a great and exciting endeavor,” O’Connor said. “One of the conclusions I draw in the book is you have to be a lifelong learning. You have to learn about the people you minister to, the people you walk among and you have to learn about the changing morays of culture.”

The book is fast-selling, O’Connor said, adding his first shipment of books is nearly gone and a second printing will arrive here about mid-October.