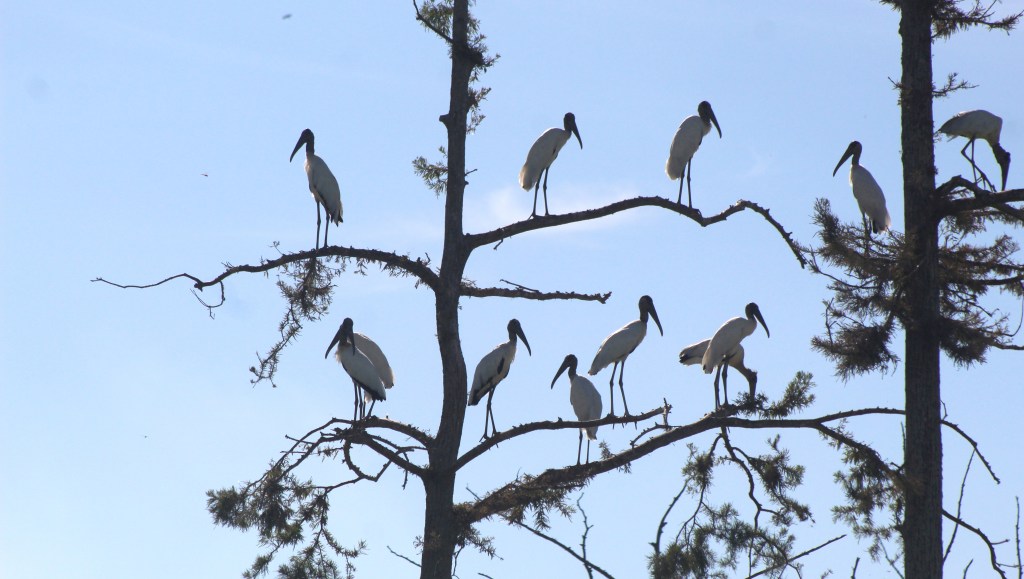 Above, a flock of wood storks roost in a tree on the edge of the swamp at St. Catherine Creek. These storks feed on crawfish and bait fish before leaving in mid September. (Hunter Cloud | The Natchez Democrat)

St. Catherine Creek National Wildlife Refuge is the destination for thousands and thousands of migratory wading birds. They flock to shallow waters as the Mississippi River recedes. Refuge visitors can watch them feed from the roadside using binoculars.

Each year, the Mississippi River floods the refuge and begins a cycle of destruction and life. Refuge manager Skye Kreisler said her staff is clearing trees from sections of the roads after floodwaters brought down timber and washed away the understory. Cleared roads means more public access, she said.

Black willow trees line a trail to Gillard Lake. She said they are pioneer trees because they pave the way for cypress and oak trees to take root by preventing erosion of the receding back waters.

“After the river recedes, the bottomland forest holds the soil. It protects the (Mississippi) River from becoming inundated with soil,” Kreisler said. “Black Willow trees will grow up thick and hold the soil in place. As they die out, the forest opens up for oak and cypress trees to grow.”

In sections where the water lingered, there is no understory beneath the trees because the vegetation could not take root. Some areas of the forest floor dried faster and have a lush understory for deer to feed on, she said.

Along the sides of East Sibley Farms Road are sections of dead trees with white exposed bark. Rusty old oil platforms rise out of the vegetation spanning across the Bugeye Turtle Channel, which flows into the Washout Bayou. The platforms were likely on the land before it became a refuge, she said. Companies still own the mineral rights on Refuge land.

“Dead trees are important to the ecosystem,” Kreisler said. “They fall over and decompose. Ultimately in Milena, all of the dead organic matter becomes what people extract in oil and gas.”

Wading birds such as ibis, egrets, herons, spoonbills, cranes, storks and cormorants roost in the limbs of dead trees. They like to have a clear view to protect them from predators, she said.

A flock of 50 Great egrets and two Roseate spoonbills sat behind an oil platform close to Lake Lucille. As Kreisler’s vehicle came to a stop, the birds went on high alert and stopped eating. Their necks stood up to watch for danger.

She said birdwatchers could get out of the car and hide behind the hood of their vehicle, so the birds are not startled. Using binoculars, a person can see the shape of their beaks. Each bird has a beak for its niche in a habitat, she said.

“Spoonbills scoop instead of peck. That is why they have a beak-shaped like a spoon,” Kreisler said. “The shape of their bill is the way they feed. Ibis have a hook, so they hook their prey, and egrets have a pointed beak they use for striking.”

In shallow water, Ibis wade and flip fish into their mouths. Small birds such as the killdeer walk the shoreline before fluttering to another eating location. A series of impoundments make up close to 1,000 acres of sanctuary for these wading birds. She manages water levels to create shallow water where the birds can wade. The water is also deep enough for gar to swim in some impoundments.

Kreisler additionally has to manage the impoundments for vegetation. She said Black Willow trees are trying to overtake the open fields, so her staff has to remove them. Planting crops such as Milo or Millet is another way to manage the habitat. These crops can be planted to attract more waterfowl. Floodwaters from the Mississippi River kept refuge workers from planting crops in time for waterfowl this year, she said. There will still be a food source for the waterfowl.

“We adjust the water levels to expose vegetation,” Kreisler said. “By the time the birds come in, all of the seeds and tubular will float to the top, and we can have more waterfowl.”

Other impoundments are still deep enough to have fish such as gar. On the edge of the swamp, gar-splash the water both to feed and breathe. SCCNWR is a good habitat for gar because the silt from the Mississippi keeps the water in a saline condition, she said.

Birds squawk from their perch in dead cypress trees. A flock of cormorants flies across the road and out into the 1,000 acres of the sanctuary. Some days, those same birds were feeding with the gar on baitfish caught in an impoundment as it drains.